Public compendia of sequencing data are now measured in petabytes. Accordingly, it is infeasible for researchers to transfer these data to local computers. Recently, the National Cancer Institute began exploring opportunities to work with molecular data in cloud-computing environments. With this approach, it becomes possible for scientists to take their tools to the data and thereby avoid large data transfers. It also becomes feasible to scale computing resources to the needs of a given analysis.

Researchers from Brigham Young University quantified transcript-expression levels for 12,307 RNA-Sequencing samples from the Cancer Cell Line Encyclopedia and The Cancer Genome Atlas. They used two cloud-based configurations and examined the performance and cost profiles of each configuration. Using preemptible virtual machines, the researchers processed the samples for as little as $0.09 (USD) per sample. As the samples were processed, they  collected performance metrics, which helped us track the duration of each processing step and quantified computational resources used at different stages of sample processing. Although the computational demands of reference alignment and expression quantification have decreased considerably, there remains a critical need for researchers to optimize preprocessing steps. 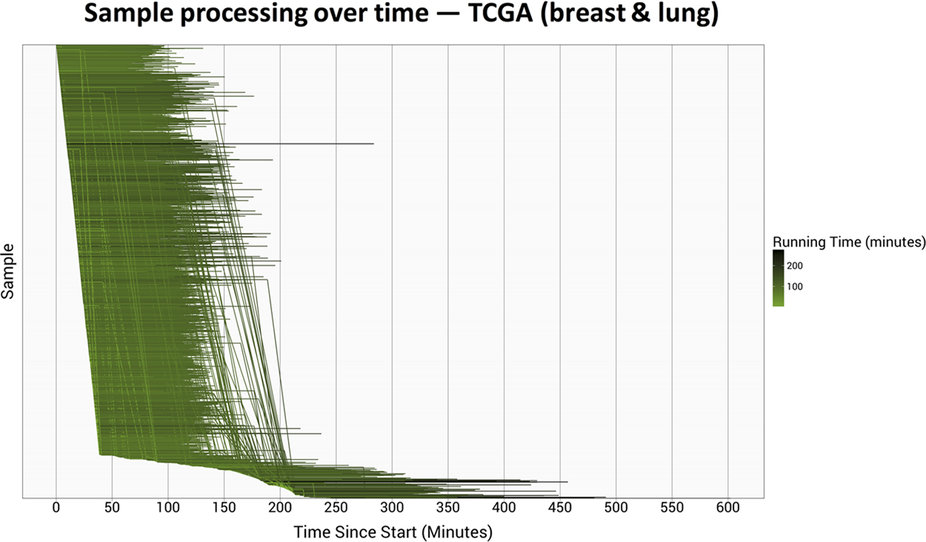 1,811 TCGA breast and lung samples were processed using a variable number of preemptible virtual machines. The horizontal lines represent the relative start and stop times at which each sample was processed. Darker lines identify samples that took longer to process. Vertical lines indicate times at which samples were preempted and then resubmitted for processing. In total, 210 preemptions occurred.

Availability – the software, scripts, and processed data are stored in a publicly accessible repository: https://osf.io/gqrz9