Recent advances in next-generation sequencing technology allow high-throughput cDNA sequencing (RNA-Seq) to be widely applied in transcriptomic studies, in particular for detecting differentially expressed genes between groups. Many software packages have been developed for the identification of differentially expressed genes (DEGs) between treatment groups based on RNA-Seq data. However, there is a lack of consensus on how to approach an optimal study design and choice of suitable software for the analysis.

In this comparative study researchers from the Queensland Brain Institute evaluate the performance of three of the most frequently used software tools: Cufflinks-Cuffdiff2, DESeq and edgeR. A number of important parameters of RNA-Seq technology were taken into consideration, including the number of replicates, sequencing depth, and balanced vs. unbalanced sequencing depth within and between groups. The researchers benchmarked results relative to sets of DEGs identified through either quantitative RT-PCR or microarray. They observed that edgeR performs slightly better than DESeq and Cuffdiff2 in terms of the ability to uncover true positives. Overall, DESeq or taking the intersection of DEGs from two or more tools is recommended if the number of false positives is a major concern in the study. In other circumstances, edgeR is slightly preferable for differential expression analysis at the expense of potentially introducing more false positives. 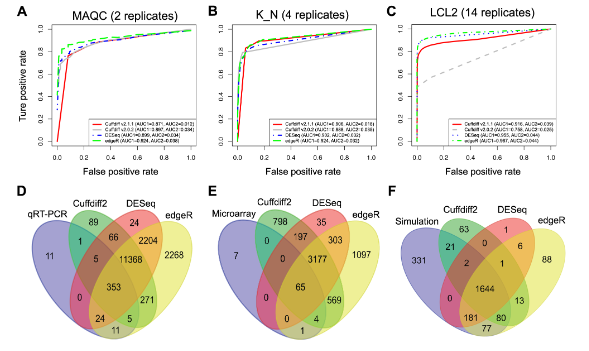