The past decade has seen an abundance of transcriptional profiling studies of preclinical models of persistent pain, predominantly employing microarray technology. In this study a team led by scientists from the University College London directly compare exon microarrays to RNA-seq and investigate the ability of both platforms to detect differentially expressed genes following nerve injury using the L5 spinal nerve transection model of neuropathic pain. They also investigate the effects of increasing RNA-seq sequencing depth. Finally they take advantage of the “agnostic” approach of RNA-seq to discover areas of expression outside of annotated exons that show marked changes in expression following nerve injury. 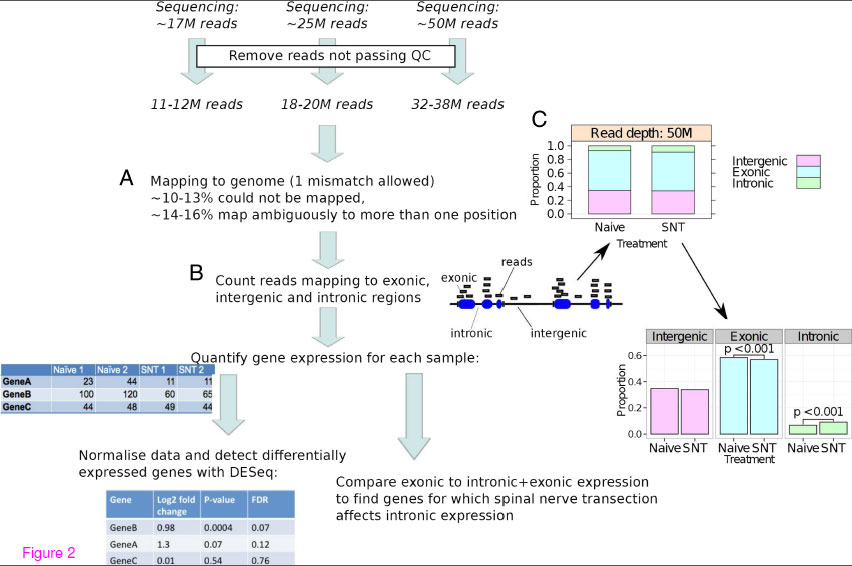 The scientists recommend the use of RNA-seq for future high-throughput transcriptomic experiments in pain studies. RNA-seq allowed the identification of a larger number of putative candidate pain genes than microarrays and can also detect a wider range of expression values in a neuropathic pain model. In addition, RNA-seq can interrogate the whole genome regardless of prior annotations, being able to detect transcription from areas of the genome not currently annotated as exons. Some of these areas are differentially expressed following nerve injury, and may represent novel genes or isoforms. The team also recommends the use of a high sequencing depth in order to detect differential expression for genes with low levels of expression.