In recent years, massively parallel complementary DNA sequencing (RNA sequencing [RNA-Seq]) has emerged as a fast, cost-effective, and robust technology to study entire transcriptomes in various manners. In particular, for non-model organisms and in the absence of an appropriate reference genome, RNA-Seq is used to reconstruct the transcriptome de novo. Although the de novo transcriptome assembly of non-model organisms has been on the rise recently and new tools are frequently developing, there is still a knowledge gap about which assembly software should be used to build a comprehensive de novo assembly.

Researchers from Friedrich Schiller University present a large-scale comparative study in which 10 de novo assembly tools are applied to 9 RNA-Seq data sets spanning different kingdoms of life. Overall, we built >200 single assemblies and evaluated their performance on a combination of 20 biological-based and reference-free metrics. This study is accompanied by a comprehensive and extensible Electronic Supplement that summarizes all data sets, assembly execution instructions, and evaluation results. Trinity, SPAdes, and Trans-ABySS, followed by Bridger and SOAPdenovo-Trans, generally outperformed the other tools compared. Moreover, the researchers  observed species-specific differences in the performance of each assembler. No tool delivered the best results for all data sets. 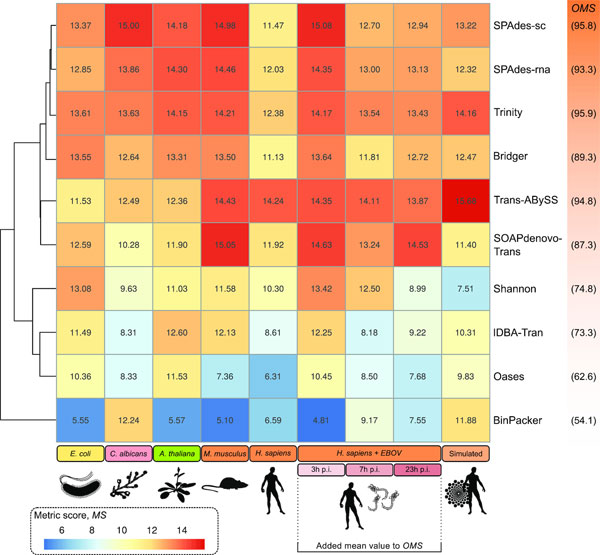 The assembly tools are clustered based on their achieved MS over all data sets. The MS for 1 assembly tool and a single data set is based on 20 pre-selected metrics (see Table 4 and Methods for details) and is shown in 1 cell in the heat map (e.g., the MS for E. coli and Trinity is 13.61). For each data set, an assembler’s MS is the sum of (0,1)-normalized scores of every single metric. The hierarchical clustering of the metric scores divides the assembly tools into 2 groups of generally high-ranked (upper half) and low-ranked (bottom half) tools. Except for Trans-ABySS , the MS reached for the largest human RNA-Seq data set is generally lower. Numbers in brackets next to the assembler names present the summarized metric scores (overall metric score, OMS) for all 9 data sets (see Methods). For the 3 similar human data sets infected with EBOV, we added the mean MS value to the OMS.

The researchers recommend a careful choice and normalization of evaluation metrics to select the best assembling results as a critical step in the reconstruction of a comprehensive de novo transcriptome assembly.