Adeno-associated virus (AAV) is recognized for its bipartite life cycle with productive replication dependent on coinfection with adenovirus (Ad) and AAV latency being established in the absence of a helper virus. The shift from latent to Ad-dependent AAV replication is mostly regulated at the transcriptional level. The current AAV transcription map displays highly expressed transcripts as found upon coinfection with Ad. So far, AAV transcripts have only been characterized on the plus strand of the AAV single-stranded DNA genome. The AAV minus strand is assumed not to be transcribed.

Here, researchers from Charité Medical School, Germany applied Illumina-based RNA sequencing (RNA-Seq) to characterize the entire AAV2 transcriptome in the absence or presence of Ad. They found known and identified novel AAV transcripts, including additional splice variants, the most abundant of which leads to expression of a novel 18-kDa Rep/VP fusion protein. Furthermore, the researchers identified for the first time transcription on the AAV minus strand with clustered reads upstream of the p5 promoter, confirmed by 5′ rapid amplification of cDNA ends and RNase protection assays. The p5 promoter displays considerable activity in both directions, a finding indicative of divergent transcription. Upon infection with AAV alone, low-level transcription of both AAV strands is detectable and is strongly stimulated upon coinfection with Ad.

Next-generation sequencing (NGS) allows unbiased genome-wide analyses of transcription profiles, used here for an in depth analysis of the AAV2 transcriptome during latency and productive infection. RNA-Seq analysis led to the discovery of novel AAV transcripts and splice variants, including a derived, novel 18-kDa Rep/VP fusion protein. Unexpectedly, transcription from the AAV minus strand was discovered, indicative of divergent transcription from the p5 promoter. This finding opens the door for novel concepts of the switch between AAV latency and productive replication. In the absence of a suitable animal model to study AAV in vivo, combined in cellulae and in silico studies will help to forward the understanding of the unique, bipartite AAV life cycle.

RNA-Seq: mapping and transcription analysis on both strands of the AAV2 genome. 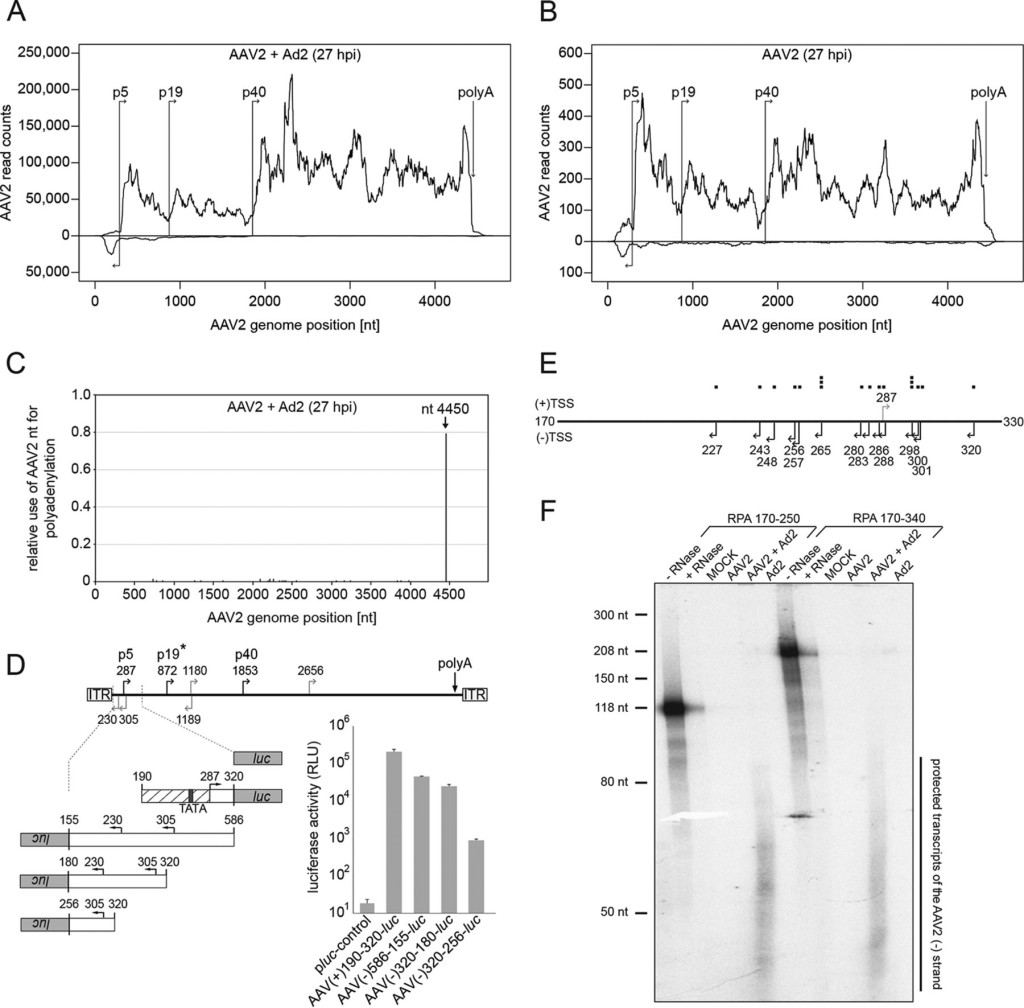 (A) Coverage map of AAV2-specific RNA-Seq reads to the AAV2 genome of AAV2/Ad2-coinfected cells at 27 hpi. The AAV2 genome scale is displayed in the center. Reads mapped to the plus strand are presented above, and reads mapped to the minus strand are presented below. (B) Display as in panel A. RNA-Seq reads of AAV2-infected cells at 27 hpi are presented. Note the different scales of the read counts in panels A and B. (C) Mapping of RNA-Seq reads ending with a poly(A) tail. The genome position of poly(A) addition is displayed relative to the totality of polyadenylated AAV reads in the data set of AAV2/Ad2-coinfected cells. (D) Promoter activity of the AAV2 p5 region in reverse direction. The upper part shows the AAV2 genome with the nucleotide positions of the transcription start sites of the p5, p19, and p40 promoters (black arrows). (E) 5ˈRACE analysis of AAV minus strand transcription. Displayed are the TSSs (arrows) derived from DNA sequences of cloned 5ˈRACE products from the AAV minus strand (nt 330 to 170). Single TSSs are displayed as black squares above the genome. The p5 promoter TSS at nt 287 (gray arrow) on the AAV plus strand is shown for orientation. (F) An RNase protection assay was performed with in vitro-transcribed hybridization probes covering AAV2 nt 170 to 250 (left part) or AAV2 nt 170 to 340 (right part) in a sense orientation for the detection of AAV minus strand transcripts in total RNA from HeLa cells either mock infected, AAV2 infected, Ad2 infected, or AAV2/Ad2 coinfected for 27 h.