Communication with bacteria deeply impacts the life history traits of their hosts. Through specific molecules and metabolites, bacteria can promote short- and long-term phenotypic and behavioral changes in the nematode Caenorhabditis elegans. The chronic exposure of C. elegans to pathogens promotes the adaptive behavior in the host’s progeny called pathogen-induced diapause formation (PIDF). PIDF is a pathogen avoidance strategy induced in the second generation of animals infected and can be recalled transgenerationally. This behavior requires the RNA interference machinery and specific nematode and bacteria small RNAs (sRNAs).

In this work, researchers from Universidad de Valparaíso, Chile assumed that RNAs from both species co-exist and can interact with each other. Under this principle, they explored the potential interspecies RNA interactions during PIDF-triggering conditions, using transcriptomic data from the holobiont. The researchers studied two transcriptomics datasets: first, the dual sRNA expression of Pseudomonas aeruginosa PAO1 and C. elegans in a transgenerational paradigm for six generations and second, the simultaneous expression of sRNAs and mRNA in intergenerational PIDF. They focused on those bacterial sRNAs that are systematically overexpressed in the intestines of animals compared with sRNAs expressed in host-naïve bacteria. They selected diverse in silico methods that represent putative mechanisms of RNA-mediated interspecies interaction. These interactions are as follows: heterologous perfect and incomplete pairing between bacterial RNA and host mRNA; sRNAs of similar sequence expressed in both species that could mimic each other; and known or predicted eukaryotic motifs present in bacterial transcripts. The researchers conclude that a broad spectrum of tools can be applied for the identification of potential sRNA and mRNA targets of the interspecies RNA interaction that can be subsequently tested experimentally. 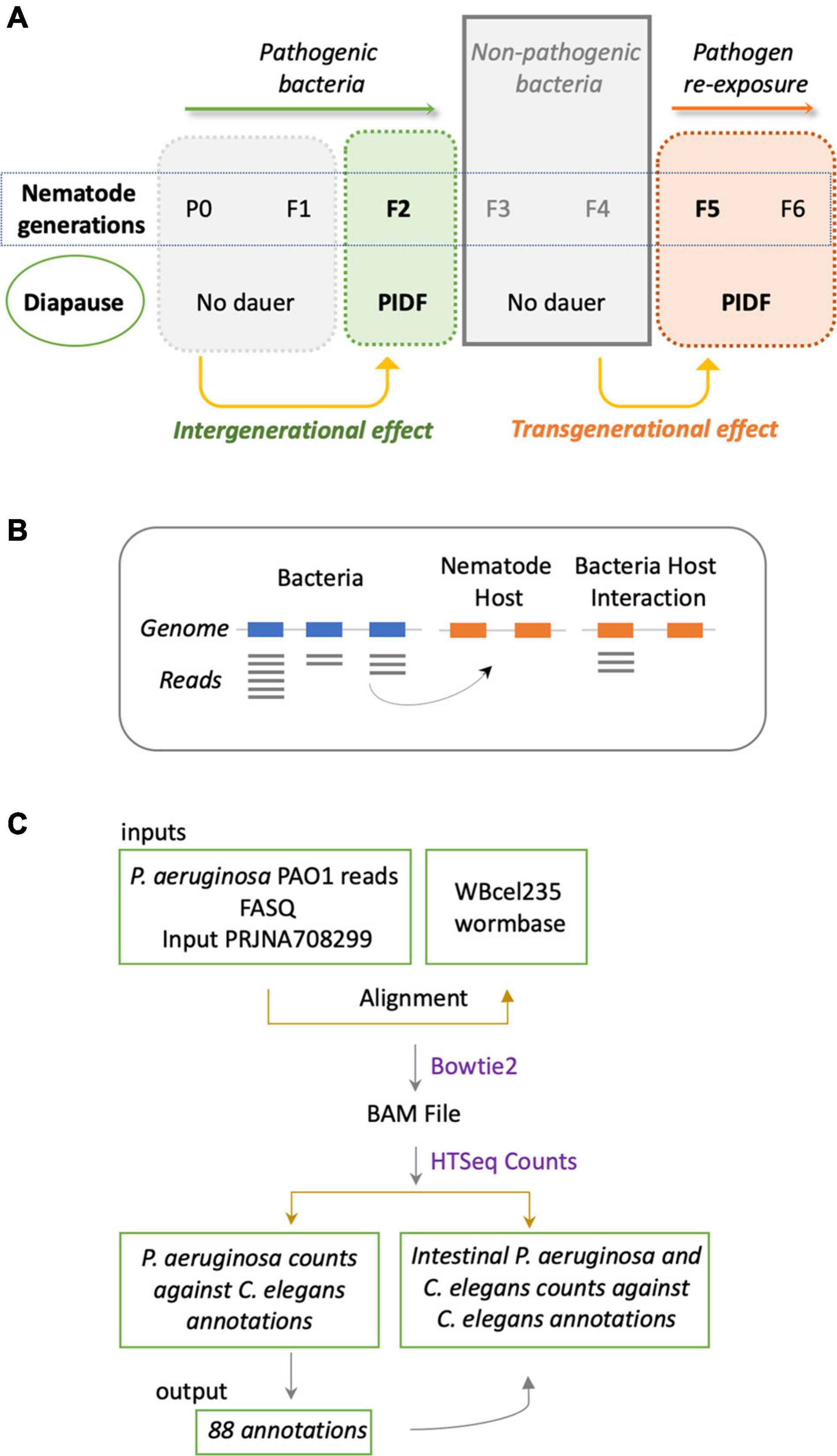 (A) Schematic representation of the inter- and transgenerational paradigm of pathogen-induced diapause formation (PIDF). Animals chronically feeding on pathogenic bacteria such as P. aeruginosa PAO1 form dauers in the second generation of exposure to the bacteria. Re-exposure to pathogens after two generations on non-pathogenic bacteria triggers the immediate formation of the dauer larvae. (B) Representation of the putative mechanism of interaction based on matching sRNA sequences from bacteria with genomic sequences of C. elegans. (C) Methodological flow to address the mechanism proposed in panel (B).