Researchers from the Garvan Institute of Medical Research have developed a new method to spot rare immune cells that are reactive against cancer cells, from within a patient’s own immune system.

The patented ‘RAGE-seq’ method enables scientists to track how immune cells evolve inside tumour tissue for the first time, revealing unprecedented insight into how to better arm the immune system to target cancer. The technique can be likened to a barcode tracker, able to scan detailed information from thousands of immune cells at a time.

“This method gives us the most detailed view yet of how immune cells behave in the human body,” says Professor Chris Goodnow, Executive Director of the Garvan Institute and co-senior author of the published work. “Immune cells play a critical role in the development of disease. This method shows significant potential to help us personalise cancer treatments to the individual.”

Development of the method, by Dr Mandeep Singh (Immunogenomics Laboratory) and Ghamdan Al-Eryani (Tumour Progression Laboratory) at Garvan, is published in the journal Nature Communications. 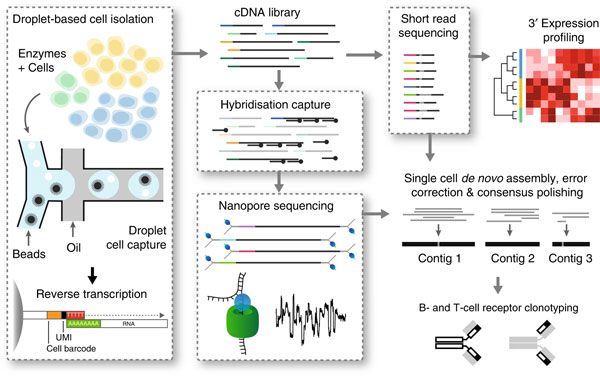 Our immune system helps protect us against foreign pathogens, such as bacteria or viruses. But it often responds poorly to cancers, which arise from the body’s own cells – usually too few immune cells ‘recognise’ them to mount an effective immune response.

Immune cells come in many different forms – they mix-and-match different types of ‘receptors’ on their cell surface, which monitor the cell’s environment. When an immune cell’s receptors recognise a potential hazard, the cell replicates to make more copies of itself, able to target the threat more effectively.

“The immune cells that recognise cancer cells are often rare,” says Associate Professor Alex Swarbrick, who heads the Tumour Progression Laboratory at Garvan. “We have to sort through thousands of cells to find these replicating cells that may make up only a small fraction of all the immune cells present in a tumour.”

Previous methods have made it possible to read the long stretches of genetic output (the RNA) that encodes an immune cell’s receptor, from single cells. But they have not had the capacity to sort through the thousands of cells present in a tumour, at a single time.

The resulting Repertoire and Gene Expression by Sequencing, or ‘RAGE-seq’, method works much like a barcode tracker. By ‘scanning’ the relevant immune cell receptors in many thousands of cells at once it can provide an accurate snapshot of how the immune cells in a tissue sample are related, and which cells may be effective at mounting a response against cancer.

“This high-throughput strategy is really opening the door to a much more detailed understanding of the cellular dynamics of the immune response,” says Dr Martin Smith, Leader of the Genomic Technologies Group at Garvan’s Kinghorn Centre for Clinical Genomics.

In a proof-of-principle study, the researchers used the method to sample 7,138 cells from the tumour and associated lymph node of a breast cancer patient. The team pinpointed a number of related cells that were present in both tissues, and which revealed specific genetic signatures of the immune response within the patient’s tumour.

A new look at disease

The researchers say the ability to find and barcode these rare cells of the immune system has the power to guide treatment strategies based on the individual.

Immunotherapy is an emerging form of cancer therapy designed to activate the immune system to better target cancer, but not all patients respond well and current methods used to assess a patient’s response give a poor snapshot of the behaviour of their immune cells.

Professor Goodnow says there is significant interest from pharmaceutical companies to better understand the immune system’s response to cancer, at a resolution now available through the RAGE-seq method. “We hope RAGE-seq will be implemented in clinical trials, providing crucial information that will help potential cancer therapeutics get to the right patients more quickly.”

The team is now applying the technique to samples from melanoma patients, to understand why half of patients receiving immunotherapy have a poor response. The researchers believe the method could also be applied to provide a better understanding of autoimmune and inflammatory diseases.

Code Availability – All scripts used for the computational pipeline of RAGE-Seq can be found at: https://github.com/KCCG/rageseq.