Researchers from Russia and Germany have created a genome-wide atlas of developmental alternative splicing changes of seven organs in six mammal species and chicken. The research was published in the journal Nature Genetics.

As the protein encoding RNA matures in eukaryotes, it gets spliced, with some parts cut out and the remaining fragments stitched together. Alternative splicing means that the same RNA fragment can either be cut out from or kept within the mature RNA. In this case, one gene can encode several RNAs and, therefore, several proteins. Although alternative splicing is known to be essential for many tissues to develop and function properly and its various disorders may cause health problems, its function and regulation on genome-wide level are still very poorly understood. Comparative research on alternative splicing in different species has been performed mostly on adult organisms, but scientists believe that alternative splicing plays a very important role in an organism’s development.

Professor Philipp Khaitovich and research scientist Pavel Mazin of the Skoltech Center for Neurobiology and Brain Restoration (CNBR) and their colleagues from the University of Heidelberg (Germany) decided to fill this gap. They used the RNA sequencing technology to create an alternative splicing atlas for seven different organs of six species of mammals and one bird species at different stages of their development, from the beginning of organogenesis to puberty. The team demonstrated the fundamental importance of alternative splicing in the formation of organs such as the brain, heart, and testes, whereas for the liver, kidneys, and ovaries alternative splicing revealed much weaker changes which, in addition, turned out to be very similar for all the studied species and were detected primarily in the genes expressed at the later stages of development and in several tissues simultaneously. This suggests that alternative splicing is needed mainly for creating tissue-specific protein isoforms that work in various tissues. 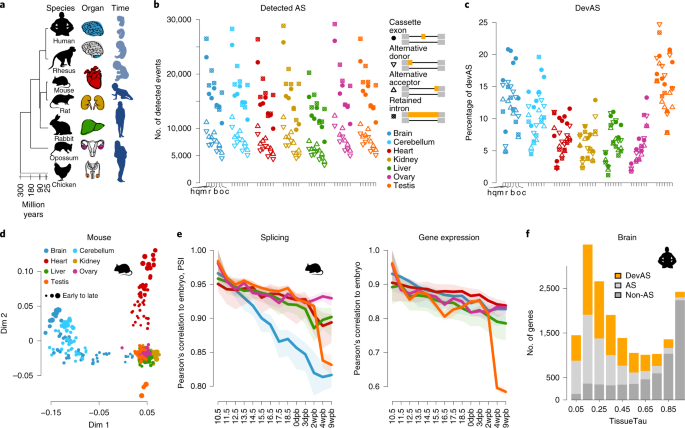 a, Schematic representation of the underlying RNA-seq dataset (1,890 libraries). b, Numbers of detected AS events for the four major classes across organs and species. Species appear in the same order and are denoted by letters: human (h), macaque (q), mouse (m), rat (r), rabbit (b), opossum (o) and chicken (c). c, Percentages of devAS events (among all detected AS events shown in b) for the four major AS classes across organs and species (x axis as shown in b). d, MDS plots for mouse samples based on pairwise distances (1 – r, Pearson’s correlation coefficient) between PSI values of all alternatively spliced cassette exons. e, Pearson’s correlation coefficient (r) of cassette exon inclusion frequencies (PSIs; left) and gene expression levels (log2-transformed reads per kilobase per million mapped reads (RPKM)) (right), between the earliest (10.5 d post-conception) and all successive developmental stages for different mouse organs. The lines depict the median and the shadings the 95% confidence intervals (CIs) based on bootstrapping analysis (1,000 replicates, with all possible pairs of samples between given and earliest stage considered). f, Numbers of genes with different tissue specificity (TissueTau) and with devAS (dPSI > 0.2), nondynamic AS (AS) or no alternatively spliced cassette exons (non-AS) for human brain. Organ and species icons (except human) are from a previous study.

“Alternative splicing is difficult to handle due to high biological and experimental noise. Another challenge in this project was an enormous amount of data: we had to process about 2,000 samples totaling several terabytes. Yet, it was all the more exciting to see patterns and new insights emerge from this chaos,” lead author Pavel Mazin says.