Comparing the abundance of one RNA molecule to another is crucial for understanding cellular functions but most sequencing techniques can target only specific subsets of RNA. In this study, researchers from the Université de Sherbrooke used a new fragmented ribodepleted TGIRT sequencing method that employs a thermostable group II intron reverse transcriptase (TGIRT) to generate a portrait of the human transcriptome depicting the quantitative relationship of all classes of non-ribosomal RNA longer than sixty nucleotides. Comparison between different sequencing methods indicated that FRT is more accurate in ranking both mRNA and non-coding RNA than viral reverse transcriptase-based sequencing methods even those that specifically target these species. Measurements of RNA abundance in different cell lines using this method correlate with biochemical estimates, confirming tRNA as the most abundant non-ribosomal RNA biotype. However, the single most abundant transcript is 7SL RNA, a component of signal recognition particle. Structured non-coding RNAs (sncRNAs) associated with the same biological process are expressed at similar levels with the exception of RNAs with multiple functions like U1 snRNA. In general, sncRNAs forming RNPs are hundreds to thousands of times more abundant than their mRNA counterparts. Surprisingly, only 50 sncRNA genes produce half of the non-rRNA transcripts detected in two different cell lines. Together the results indicate that the human transcriptome is dominated by a small number of highly expressed sncRNAs specialized in functions related to translation and splicing. 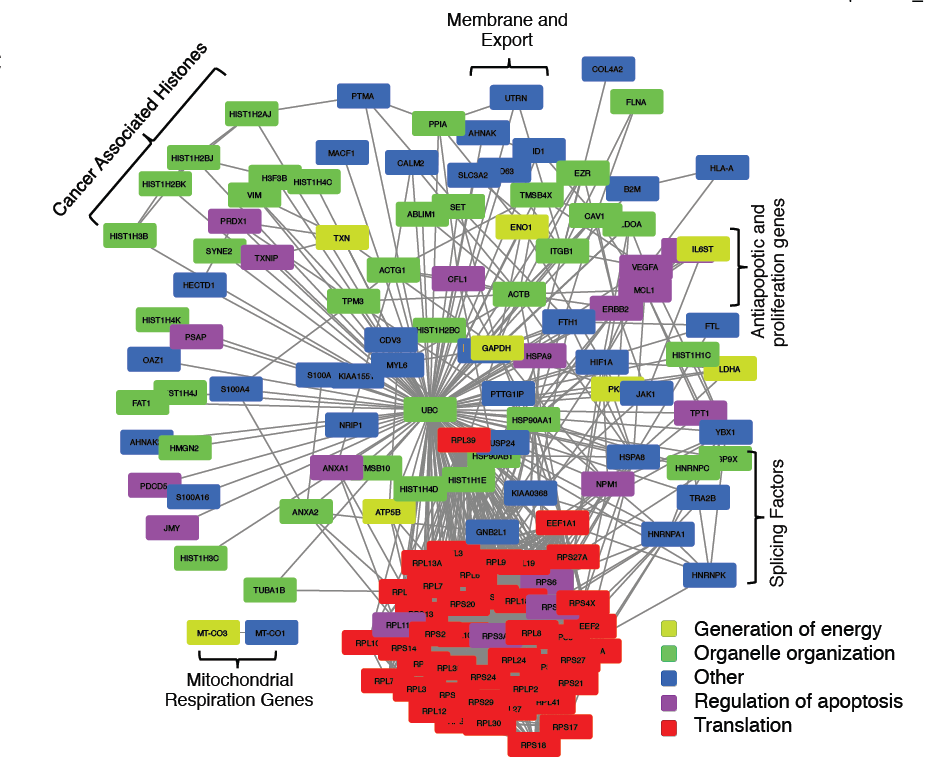 Genes producing RNAs with more than 100 TPM were identified and their functional, genetic and physical interactions obtained from STRING (Szklarczyk et al. 2015) and illustrated as an interaction network. The main gene ontology annotations for the genes are indicated at bottom right. Open brackets indicate examples of complexes associated with cancer phenotypes and other established phenotypes of SKOV3ip1 cells.