TTP Labtech Ltd, a global leader in the design and development of automated instrumentation and consumables for life science applications, and the University of California San Diego (UC San Diego), have announced that their collaboration has resulted in a new workflow for single cell sequencing, which reduces the cost of sample preparation by 90%. The workflow, which has been published in the Journal of Laboratory Automation, was developed through the combination of UC San Diego’s expertise in genomics and the use of TTP Labtech’s mosquito liquid handlers, which can pipette nanolitre to microlitre volumes with high accuracy and reproducibility, to miniaturise and automate the process.

Although single-cell genomics is advancing rapidly, researchers face challenges linked with reproducibility, sensitivity, scalability and cost, particularly when trying to miniaturise high-throughput applications. To maximise accuracy and precision, library prep protocols recommend volumes that are within the range of manual pipettes or large-volume liquid handlers. However, only a small proportion of each of the libraries prepared will be required for sequencing. The focus of UC San Diego’s partnership with TTP Labtech was to miniaturise single-cell RNA library prep reaction set-up, to minimise sample and reagent requirements. The resulting workflow has been shown to reduce library prep costs by up to 90% while maintaining throughput, accuracy and reproducibility.

The miniaturisation of library prep volumes was achieved using TTP Labtech’s mosquito HTS and HV liquid handlers, which accurately dispense volumes between 25 nL and 1.2 μL and 0.5 to 5 μL, respectively. Both instruments use true positive-displacement pipetting technology, which maintains volumetric accuracy even for highly viscous liquids, enabling high concentration gDNA to be handled, to save on reagent cost and sample input. To assess the quality of the libraries, UC San Diego applied the workflow to analyse pancreatic differentiation of human embryonic stem cells. The resulting single-cell RNA-sequencing data were analysed to determine the reproducibility of this system and its ability to distinguish not only between cells at different stages of differentiation but also between individual cells within each stage.

Joby Jenkins, Product Manager, TTP Labtech, commented: “Single cell sequencing requires large numbers of samples to be handled in order to provide valid data based on population studies. Reproducibility and sensitivity, as well as scalability and cost, can be limiting factors when large numbers of cells are analysed, and we are very pleased that our partnership with UCSD has achieved our goal of improving sample prep for single cell genomics research.”

Dr Louise Laurent, MD, PhD, Associate Professor, UC San Diego, said: “The workflow we have developed, in partnership with TTP Labtech, has the potential to provide researchers with significant cost savings while maintaining the quality of single cell sequencing. The instrument cost and their ease-of-use make the mosquito liquid handlers viable options for labs that would like to scale-down and automate next-generation sequencing sample preparation.”

TTP Labtech will be presenting a poster on the published workflow at the Single Cell Genomics Conference, 14-16 September 2016, Wellcome Genome Campus, Hinxton, UK and exhibiting at ASHG 2016 booth #1326, 18-22 October 2016, Vancouver, BC, Canada 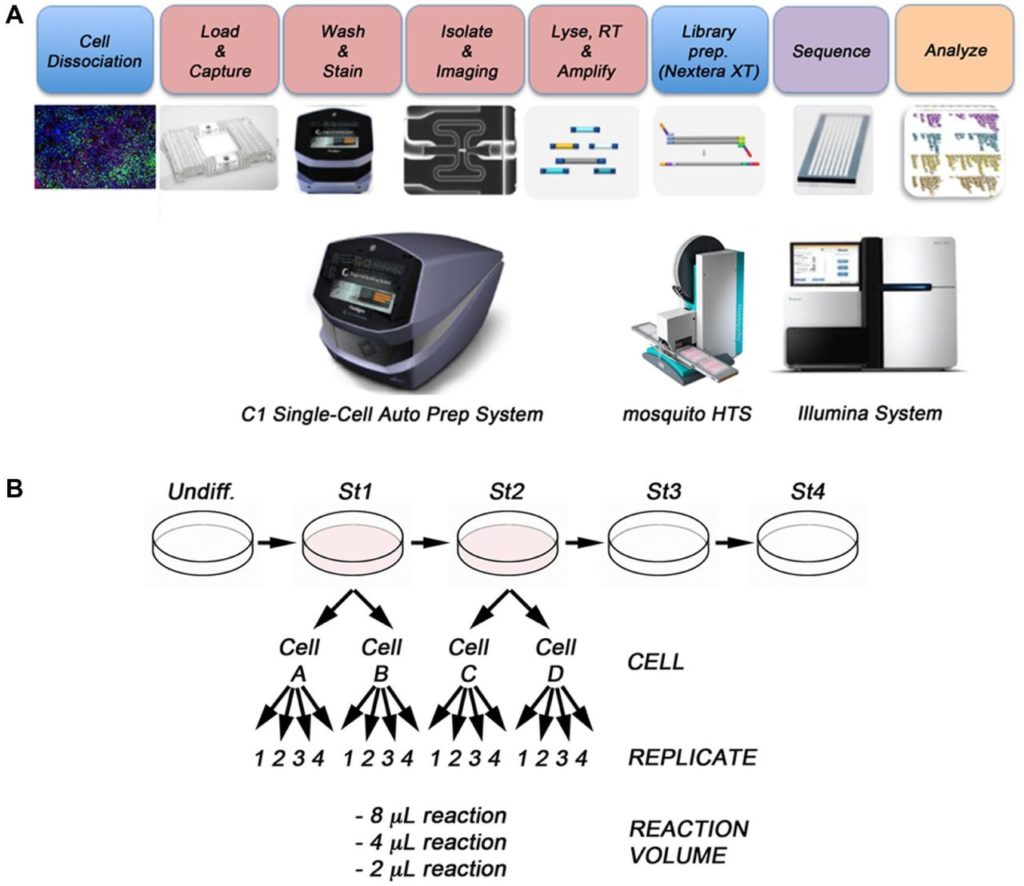 (A) After differentiation, the cell cultures were dissociated to single-cell suspensions and loaded onto a Fluidigm C1 Single-Cell Auto Prep Array for mRNA-Seq. On the arrays, the cells were lysed, and reverse transcription of the mRNA and PCR amplification of the cDNA were performed using the C1 Single-Cell Auto Prep System (Fluidigm). Libraries were then prepared using the Nextera XT DNA Library Prep Kit and mosquito HTS liquid handler (TTP). For the final PCR reactions, we used a Bio-Rad 384 Thermal Cycler. Libraries were pooled and sequenced on an Illumina HiSeq 2500. (B) WA09 human embryonic stem cells were differentiated in vitro to the pancreatic lineage. Cells from stages 1 and 2 were collected and analyzed using the procedures outlined in A. Two independent cells from stage 1 (cell A and cell B) and two cells from stage 2 (cell C and cell D) were selected and yielded with similar cDNA concentrations (mean [SD] concentration = 0.38 [0.04] ng/µL). For library preparation, we tested 2-µL, 4-µL, and 8-µL final volume reactions, with four replicates per reaction volume.