Repetitive elements (REs) comprise 40–60% of the mammalian genome and have been shown to epigenetically influence the expression of genes through the formation of fusion transcript (FTs). Researchers from the National Institute of Environmental Health Sciences previously showed that an intracisternal A particle forms an FT with the agouti gene in mice, causing obesity/type 2 diabetes.

To determine the frequency of FTs genome-wide, they developed a TopHat-Fusion-based analytical pipeline to identify FTs with high specificity. The researchers applied it to an RNA-seq dataset from the nucleus accumbens (NAc) of mice repeatedly exposed to cocaine. Cocaine was previously shown to increase the expression of certain REs in this brain region. Using this pipeline that can be applied to single- or paired-end reads, they identified 438 genes expressing 813 different FTs in the NAc. Although all types of studied repeats were present in FTs, simple sequence repeats were underrepresented. Most importantly, reverse-transcription and quantitative PCR validated the expression of selected FTs in an independent cohort of animals, which also revealed that some FTs are the prominent isoforms expressed in the NAc by some genes. In other RNA-seq datasets, developmental expression as well as tissue specificity of some FTs differed from their corresponding non-fusion counterparts. Finally, in silico analysis predicted changes in the structure of proteins encoded by some FTs, potentially resulting in gain or loss of function. Collectively, these results indicate the robustness of this pipeline in detecting these new isoforms of genes, which the researchers believe provides a valuable tool to aid in better understanding the broad role of REs in mammalian cellular biology.

TopHat-Fusion was used to identify FTs. Reads were allowed to be mapped to one unique genomic locus on the reference genome to increase specificity of findings. The stringent criteria adopted to determine whether a transcript was expressed as a fusion are depicted in the figure. 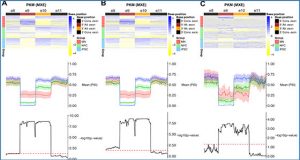 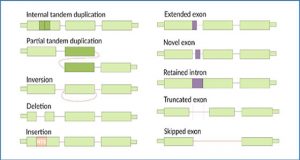