Just as asking a single person about their health will provide tailored, personalized information impossible to glean from a large poll, an individual cell’s genome or transcriptome can provide much more information about their place in living systems than sequencing a whole batch of cells. But until recent years, the technology didn’t exist to get that high resolution genomic data—and until today, there wasn’t a reliable way to ensure the high quality and usefulness of that data.

From identifying the specific genes associated with sickle cell anemia and breast cancer to creating the mRNA vaccines in the ongoing COVID-19 pandemic, scientists have been searching genomes to unlock the secrets of life since the Human Genome Project of the 1990s. Technology has leaped from those early days of batching thousands of cells together to decrypt the millions of base pairs that make up genetic information, and in 2009 researchers created scRNA-Seq, now used widely in biomedical research, which only sequences the transcriptome or the expressed portion of genome in a single cell of a living organism.

Unfortunately, scRNA-Seq data is very noisy and has plenty of errors and quality issues. Sequencing a single cell rather than many cells results in frequent “dropouts”—missing genes in the data. A single cell, like a single person, may have its own health issues or be at an awkward stage in its life cycle—it may have just divided, or be on its way to cell death, which can create more errors or technical variations in the scRNA-Seq data. Besides the single-cell specific problems, genomic profiling usually comes with “normal” issues of sequencing errors. All these errors need to be “cleaned” from the data before it can be used or interpreted, which is where the new AI algorithm comes in.

The algorithm, called AutoClass, is a step up from existing statistical methods. Most existing methods assume that errors (or noises) would follow certain predefined distribution, or how likely the errors will occur and how big the errors can be. Existing methods are often unable to fully clean the data as to reveal biological signals, and may even add new errors because of their improper assumptions on data distribution. In the opposite, AutoClass does not make any distributional assumption, hence can effectively correct a wide range of noises or technical variations.

AutoClass integrates a classifier to a regular autoencoder,
as to fully reconstruct scRNA-Seq data 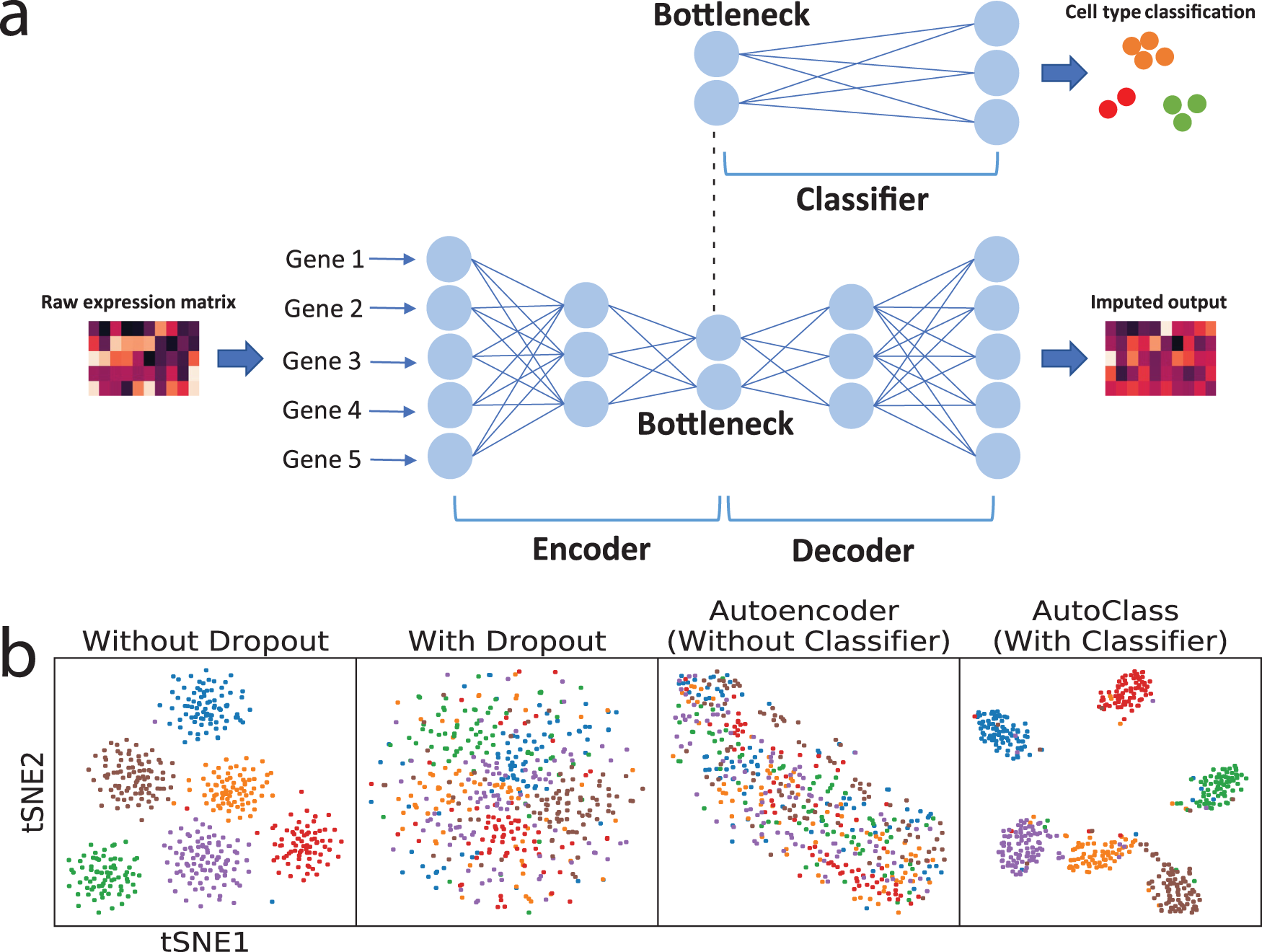 a AutoClass consists a regular autoencoder and a classifier branch from the bottleneck layer. The input raw expression data is compressed in the encoder, and reconstructed in the decoder, the classifier branch helps to retain signal in data compression. The output of the autoencoder is the desired imputed data (see “Methods” for details). b t-SNE plots of Dataset 1 without dropout, with dropout, with dropout imputed by a regular autoencoder and AutoClass.

“AutoClass is an AI algorithm based on a special deep neural network designed to maximize both noise removal and signal retention.” Dr. Luo said, “The AI teaches itself to differentiate signal vs noise in the data by seeing enough data. Usually the more data it sees, the better it performs.”

In the study, Dr. Luo and his team demonstrated AutoClass can reconstruct high quality scRNA-Seq data and enhance downstream analysis in multiple aspects. In addition, AutoClass is robust and performs well in various scRNA-Seq data types and conditions.

AutoClass is highly efficient and scalable, and works well with data of a wide range of sample sizes and feature sizes, and runs smoothly even in a regular PC or laptop.