Single-cell sequencing technologies are revolutionizing biology, but are limited by the need to dissociate fresh samples that can only be fixed at later stages. Oxford Brookes University researchers present ACME (ACetic-MEthanol) dissociation, a cell dissociation approach that fixes cells as they are being dissociated. ACME-dissociated cells have high RNA integrity, can be cryopreserved multiple times, can be sorted by Fluorescence-Activated Cell Sorting (FACS) and are permeable, enabling combinatorial single-cell transcriptomic approaches. As a proof of principle, the researchers have performed SPLiT-seq with ACME cells to obtain around ∼34K single cell transcriptomes from two planarian species and identified all previously described cell types in similar proportions. ACME is based on affordable reagents, can be done in most laboratories and even in the field, and thus will accelerate our knowledge of cell types across the tree of life. 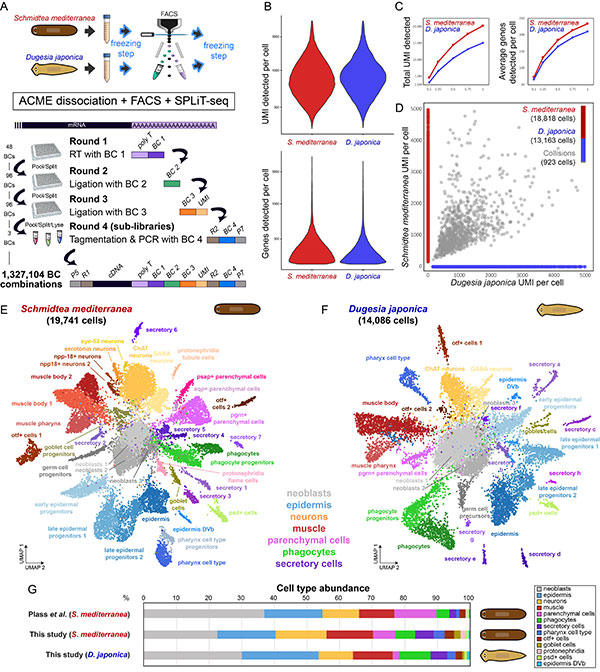 A: Experimental workflow. We used ACME dissociated and FACS-sorted cells from the planarian species S. mediterranea and D. japonica, after two freezing steps. For SPLiT-seq, combinatorial barcoding consisted of 4 rounds of barcoding with 48 x 96 x 96 x 3 barcodes. cDNA molecules coming from each cell are uniquely labelled by one of the 1,327,104 possible barcode combinations. B: Violin plots showing the distribution of UMI counts and genes detected per cell. C: Saturation plots for UMIs per cell (left) and genes per cell (right) at given fractions of the complete sequencing depth, for the 19,741 and 14,086 single cell transcriptomes sequenced above threshold for S. mediterranea and D. japonica respectively. D: Scatter plot of S. mediterranea (red) versus D. japonica (blue) UMI counts per cell. Collisions shown in grey. E-F: UMAP visualization of 19,741 S. mediterranea cells (F) and 14,086 D. japonica cells (G), coloured by cluster identity and annotated on the basis of marker genes and homologous marker genes respectively. G: Comparison of cell proportions for S. mediterranea, in comparison with a previous cell type atlas (Plass et al.) and D. japonica. Cell clusters are grouped by cell type group.