Viral metagenomics (viromics) can provide a great contribution in expanding the knowledge of viruses and the relationship with their hosts. Viromic studies on marine organisms are still at a very early stage and only little efforts have been spent in the identification of viruses associated to marine invertebrates to date, leaving the complexity of marine viromes associated to bivalve hosts almost completely unexplored. However, the potential use of viromic approaches in the management of viral diseases affecting aquacultured species has been recently evidenced by the flourishing of studies on the Ostreid herpesvirus type-1, which has been associated with bivalve mortality events.

Researchers from the University of Padua discuss an effective pipeline to retrieve and reconstruct nearly complete and previously unreported viral genomes from existing host RNA-seq data. As a case study, they report the identification of seven RNA-virus genomes within the frame of a highly diversified viral community that characterizes both Crassostrea gigas and Mytilus galloprovincialis samples collected from the lagoon of Goro (Italy). 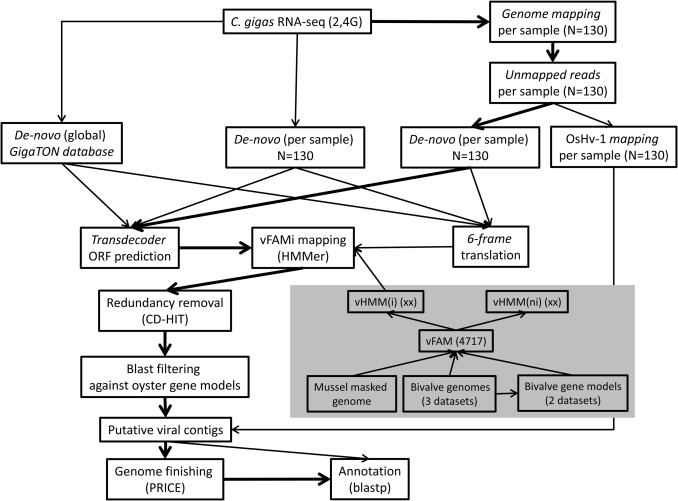 Overview of the analysis pipelines. Bold arrows indicate the most efficient pipeline. The grey-shadowed box depicts the analyses performed to identify the informative vFam domains for marine bivalve RNA-seq data.