Astroid – transcriptome reconstruction on the basis of a flow network

The advancement of RNA sequencing (RNA-seq) has provided an unprecedented opportunity to assess both the diversity and quantity of transcript isoforms in an mRNA transcriptome. In this paper, researchers from the University of Kentucky revisit the computational problem of transcript reconstruction and quantification. Unlike existing methods which focus on how to explain the exons and splice variants detected by the reads with a set of isoforms, they aim at reconstructing transcripts by piecing the reads into individual effective transcript copies. Simultaneously, the quantity of each isoform is explicitly measured by the number of assembled effective copies, instead of estimated solely based on the collective read count.

The researchers have developed a novel method named Astroid that solves the problem of effective copy reconstruction on the basis of a flow network. The RNA-seq reads are represented as vertices in the flow network and are connected by weighted edges that evaluate the likelihood of two reads originating from the same effective copy. A maximum likelihood set of transcript copies is then reconstructed by solving a minimum-cost flow problem on the flow network. Simulation studies on the human transcriptome have demonstrated the superior sensitivity and specificity of Astroid in transcript reconstruction as well as improved accuracy in transcript quantification over several existing approaches. The application of Astroid on two real RNA-seq datasets has further demonstrated its accuracy through high correlation between the estimated isoform abundance and the qRT-PCR validations. 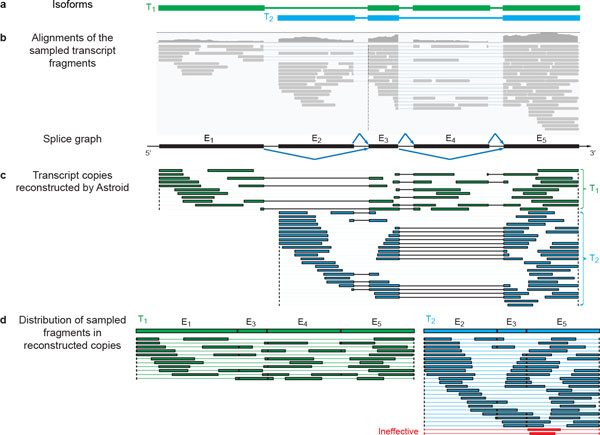 Availability – The software package can be accessed at http://www.netlab.uky.edu/p/bioinfo/Astroid. The program takes read alignment as input in SAM format, and provides reconstructed transcripts in the standard GTF format. The estimated abundance for each gene or isoform will be given in the units of eTPM.