The B-cell receptor enables individual B cells to identify diverse antigens, including bacterial and viral proteins. While advances in RNA-seq have enabled high throughput profiling of transcript expression in single cells, the unique task of assembling the full-length heavy and light chain sequences from single cell RNA-seq (scRNA-seq) in B cells has been largely unstudied.

Researchers at the Toyota Technological Institute at Chicago developed a new software tool, BASIC, which allows investigators to use scRNA-seq for assembling BCR sequences at single cell resolution. To demonstrate the utility of the software, the researchers subjected nearly 200 single human B cells to scRNA-seq, assembled the full-length heavy and the light chains, and experimentally confirmed these results by using single cell primer based nested PCRs and Sanger sequencing. 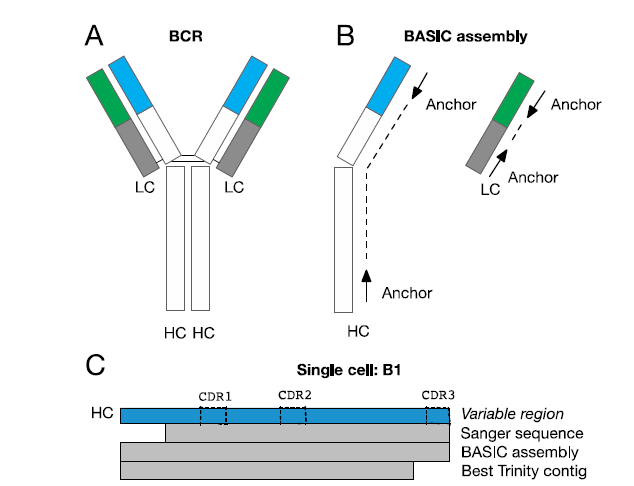 A) The BCR is a large ‘Y’ shaped protein complex composed of two identical heavy chains (HC) and two identical light chains (LC). The complementarity determining regions (CDRs) are those parts of the variable regions that participate in the binding of antigens. B) Anchors are stitched together to assemble the HC and LC. C) Illustration of the HC variable region sequence for single cell PW1_B1 along with the Sanger sequence, the BASIC assembled sequence, and the best contig reported by Trinity. Note the absence of CDR3 from the Trinity contig, and the BASIC assembly extending past the 5’ PCR primer site used in the Sanger sequence.