Bitter or sweet? RNA-Seq uncovers how taste cells decide what they want to be

Ever burn your tongue so badly that you were unable to taste your food for a few days? Luckily, a unique feature of taste cells is that they continually regenerate every 10 to 14 days. Now, a new study from the Monell Center and collaborating institutions advances understanding of how stem cells on the tongue grow into the different types of mature taste cells that detect either sweet, salty, sour, bitter, or umami.

“We still have many open questions about how the sense of taste works. Some of these newly-discovered genes may help us better understand how a taste cell detects a given taste quality,” said Monell Center molecular neurobiologist Peihua Jiang, PhD, the study’s senior author. “Who knows, someday we may be able to use this knowledge to generate fewer bitter cells in a bitter-sensitive person to help that person enjoy healthy bitter-tasting vegetables.”

In the current paper, published online in the open access journal Scientific Reports, Jiang and his collaborators studied taste organoids at different stages of growth to identify which genes are turned on at each stage of taste cell generation.

Using a powerful genetic technology called RNA-seq, these experiments revealed a nearly comprehensive list of all the genes, including some not previously identified, that guide the development of taste cells. The studies also revealed when during taste cell differentiation these genes influence whether a given taste cell ultimately will respond to either salty, sweet, sour, bitter or umami. 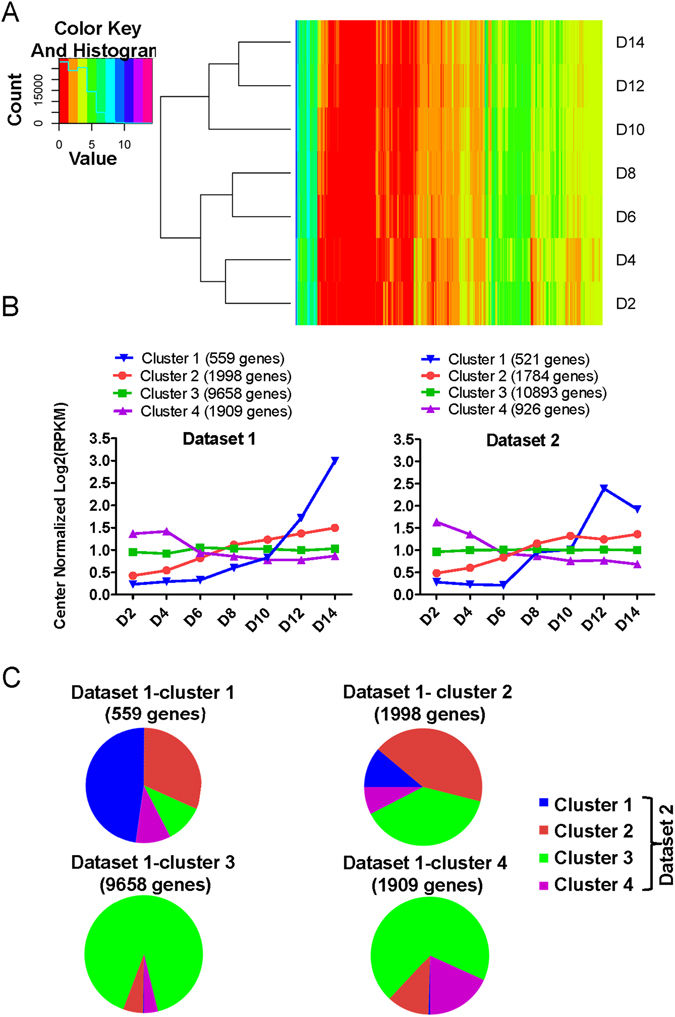 Transcriptome analyses were performed on day (D) 2, 4, 6, 8, 10, 12, and 14 organoids derived from sorted Lgr5+ cells. (A) Hierarchical cluster analysis shows that organoids at closely related stages are clustered together based on their gene expression patterns. The heat map indicates distinct gene expression profiles for organoids at each developmental stage. The color key represents log2-transformed RPKM counts. (B) K-means analysis reveals four different gene clusters in datasets 1 and 2 with their unique temporal expression patterns. Taste-related genes such as Tas1rs and Tas2rs are predominantly found in cluster 1, showing an increased expression level during organoid growth, especially at later stages. The y-axis depicts normalized log2(RPKM) values for centers for each cluster. (C) Relative portion of interacting genes between gene clusters derived from K-means analyses of datasets 1 and 2.

Other experiments expanded the findings to provide clues about the molecular signals that may direct the taste stem cells to go down one path or another. Using pharmacological approaches, the researchers identified the so-called signaling proteins within the immature taste cells that cause the developing cells to multiply and turn into specific cell types. These studies revealed the important roles of several signaling pathways, including ones not previously known to play a role in taste.