BRB-seq – the quick and cheaper future of RNA sequencing

EPFL bioengineers have developed a new method for Bulk RNA Sequencing that combines the multiplexing-driven cost-effectiveness of a single-cell RNA-seq workflow with the performance of a bulk RNA-seq procedure.

RNA sequencing is a technique used to analyze entire genomes by looking at the expression of their genes. Today, such genome-wide expression analyses are a standard tool for genomic studies because they rely on high-throughput technologies, which themselves have become widely available.

Nonetheless, RNA sequencing is still expensive and time-consuming, because it first requires the costly preparation of an entire genomic library – the DNA pool generated from the RNA of cells – while the data itself are also difficult to analyze. All this makes RNA sequencing difficult to run, rendering its adoption not as widespread as it could be.

Some new approaches have come in to help, propelled by the revolution in single-cell transcriptomics, which uses what is known as “sample barcoding” or “multiplexing”. Here, individual “barcode” sequences are added to each DNA fragment during library preparation so that each one can be identified and sorted before the analysis of the final data – meaning that this approach only requires a single library that contains multiple distinct samples or cells.

Barcoding reduces both cost and time, and this could extend to bulk RNA sequencing of large sets of samples. But there is still trouble with adapting and validating protocols for reliable and cheap profiling of bulk RNA samples – which is what we’re faced with when trying to analyze the transcriptome of cells or tissues.

Now, scientists from the lab of Bart Deplancke at EPFL’s Institute of Bioengineering have developed a novel approach called Bulk RNA Barcoding and sequencing (BRB-seq) which is 25 times less expensive than a conventional commercial RNA sequencing technology (Illumina’s TruSeq).

Among its many advantages, BRB-seq is quick and preserves strand-specificity – a challenge in the field, having to do with transcribing DNA in the correct direction. As such, BRB-seq offers a low-cost approach for performing transcriptomics on hundreds of RNA samples, which can increase the number of biological replicates (and therefore experimental accuracy) in a single run.

In terms of performance, the scientists found that BRB-seq can detect the same number of genes as “the gold standard” in the field, namely TruSeq Stranded mRNA, at the same sequencing depth and that the technique produces reliable data even with low-quality RNA samples. Moreover, it generates genome-wide transcriptomic data at a cost that is comparable to profiling four genes using RT-qPCR, which is currently a standard, but low-throughput method for measuring gene expression. 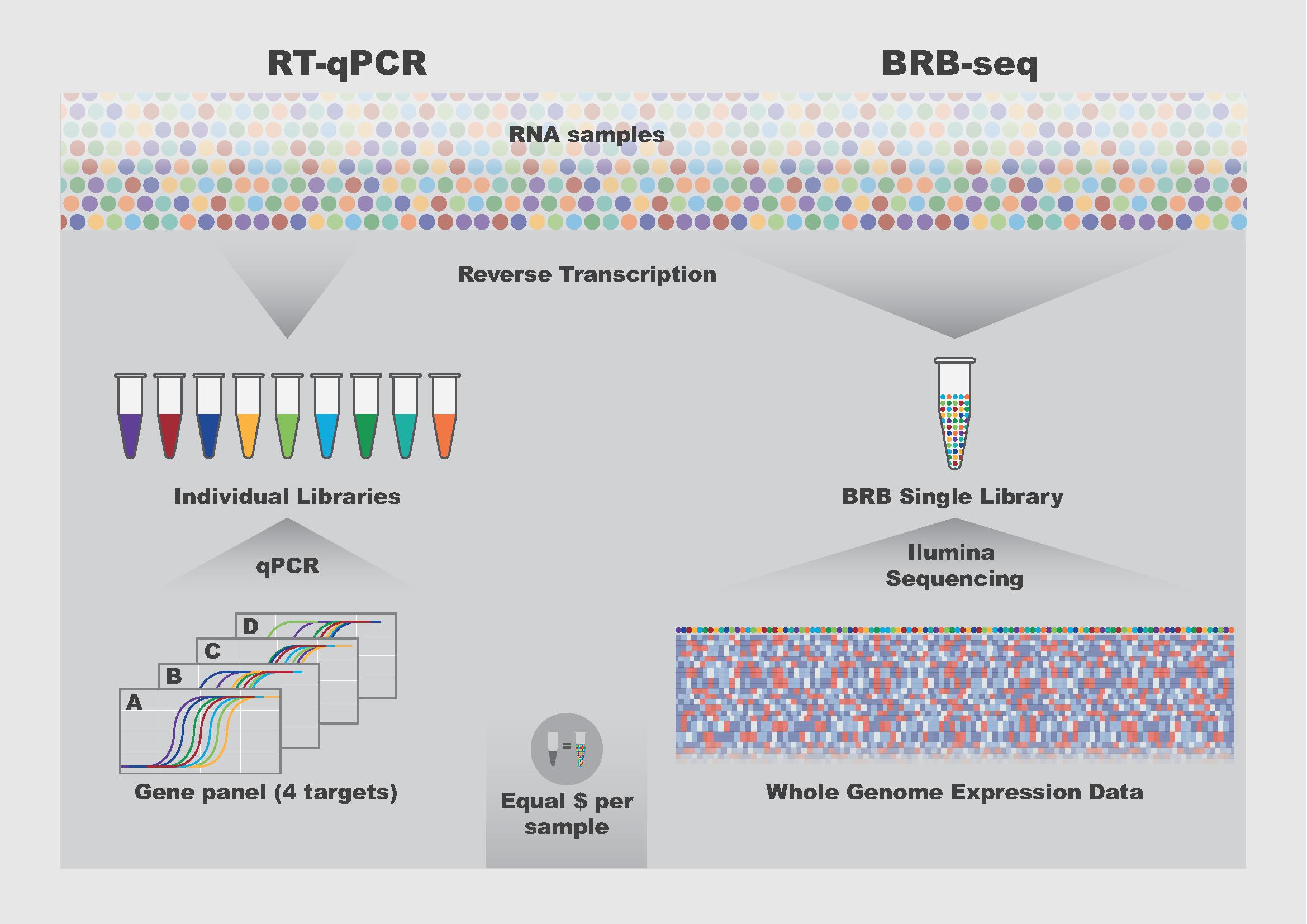 In a test, BRB-seq could generate ready-to-sequence genomic libraries for up to 192 samples a day, requiring only two hours of hands-on time. The technique is combined with a user-friendly pipeline for pre-processing and analyzing sequencing data, allowing result acquisition in a single day.

“Since its release, dozens of labs and companies have already contacted us to help them implement the BRB-seq approach,” says Bart Deplancke. “Because of BRB-seq’s low cost, these researchers realized that they could now analyze many more samples with the same budget, thus vastly increasing the scope and reproducibility of their experiments. We therefore anticipate that BRB-seq or a comparable approach will over the longer term become standard in any molecular biology lab and replace RT-qPCR as the first gene expression profiling option.”