from Nature by Anna Nowogrodzki – Aviv Regev likes to work at the edge of what is possible. In 2011, the computational biologist was collaborating with molecular geneticist Joshua Levin to test a handful of methods for sequencing RNA. The scientists were aiming to push the technologies to the brink of failure and see which performed the best. They processed samples with degraded RNA or vanishingly small amounts of the molecule. Eventually, Levin pointed out that they were sequencing less RNA than appears in a single cell.

To Regev, that sounded like an opportunity. The cell is the basic unit of life and she had long been looking for ways to explore how complex networks of genes operate in individual cells, how those networks can differ and, ultimately, how diverse cell populations work together. The answers to such questions would reveal, in essence, how complex organisms such as humans are built. “So, we’re like, ‘OK, time to give it a try’,” she says. Regev and Levin, who both work at the Broad Institute of MIT and Harvard in Cambridge, Massachusetts, sequenced the RNA of 18 seemingly identical immune cells from mouse bone marrow, and found that some produced starkly different patterns of gene expression from the rest. They were acting like two different cell subtypes.

That made Regev want to push even further: to use single-cell sequencing to understand how many different cell types there are in the human body, where they reside and what they do. Her lab has gone from looking at 18 cells at a time to sequencing RNA from hundreds of thousands — and combining single-cell analyses with genome editing to see what happens when key regulatory genes are shut down. (read more…) 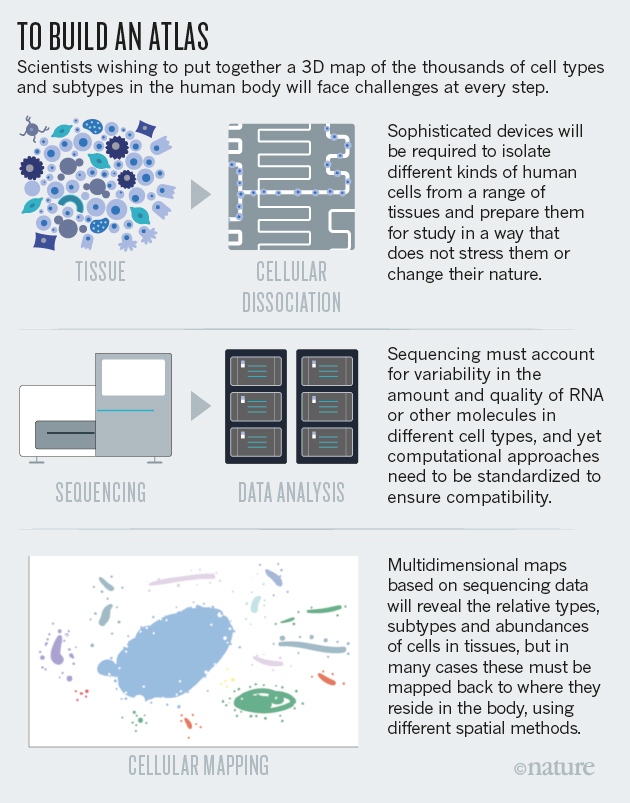