The purpose of gene expression analysis is to look for the association between regulation of gene expression levels and phenotypic variations. This association based on gene expression profile has been used to determine whether the induction/repression of genes correspond to phenotypic variations including cell regulations, clinical diagnoses and drug development. Statistical analyses on microarray data have been developed to resolve gene selection issue. However, these methods do not inform us of causality between genes and phenotypes.

Here, a team led by researchers from Idaho State University propose the dynamic association rule algorithm (DAR algorithm) which helps ones to efficiently select a subset of significant genes for subsequent analysis. The DAR algorithm is based on association rules from market basket analysis in marketing. The researchers first propose a statistical way, based on constructing a one-sided confidence interval and hypothesis testing, to determine if an association rule is meaningful. Based on the proposed statistical method, they then developed the DAR algorithm for gene expression data analysis. The method was applied to analyze four microarray datasets and one Next Generation Sequencing (NGS) dataset: the Mice Apo A1 dataset, the whole genome expression dataset of mouse embryonic stem cells, expression profiling of the bone marrow of Leukemia patients, Microarray Quality Control (MAQC) data set and the RNA-seq dataset of a mouse genomic imprinting study. A comparison of the proposed method with the t-test on the expression profiling of the bone marrow of Leukemia patients was conducted. 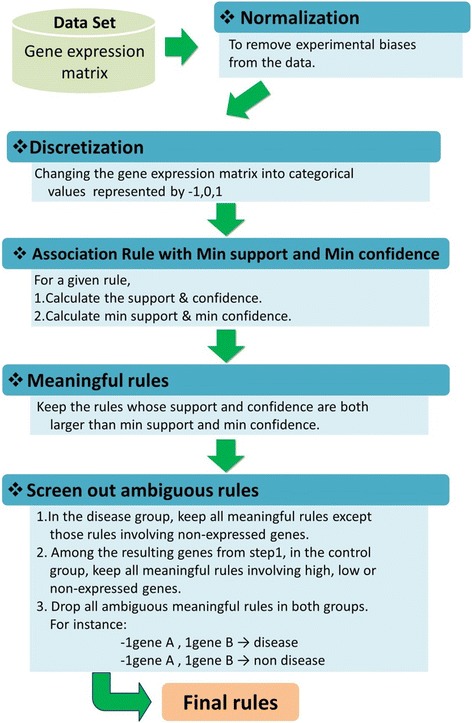 The proposed DAR algorithm not only was able to identify a set of differentially expressed genes that largely agreed with that of other methods, but also provided an efficient and accurate way to find influential genes of a disease.

Availability – The code and dataset can be downloaded from www.mixturetree.net.