Transfer RNAs (tRNA) are the most common RNA molecules in cells and have critical roles as both translators of the genetic code and regulators of protein synthesis. As such, numerous methods have focused on studying tRNA abundance and regulation, with the most widely used methods being RNA-seq and microarrays. Though revolutionary to transcriptomics, these assays are limited by an inability to encode tRNA modifications in the requisite cDNA. These modifications are abundant in tRNA and critical to their function.

Here, researchers from the University of California Santa Cruz describe proof-of-concept experiments where individual tRNA molecules are examined as linear strands using a biological nanopore. This method utilizes an enzymatically ligated synthetic DNA adapter to concentrate tRNA at the lipid bilayer of the nanopore device and efficiently denature individual tRNA molecules, as they are pulled through the α-hemolysin (α-HL) nanopore. Additionally, the DNA adapter provides a loading site for ϕ29 DNA polymerase (ϕ29 DNAP), which acts as a brake on the translocating tRNA. This increases the dwell time of adapted tRNA in the nanopore, allowing us to identify the region of the nanopore signal that is produced by the translocating tRNA itself. 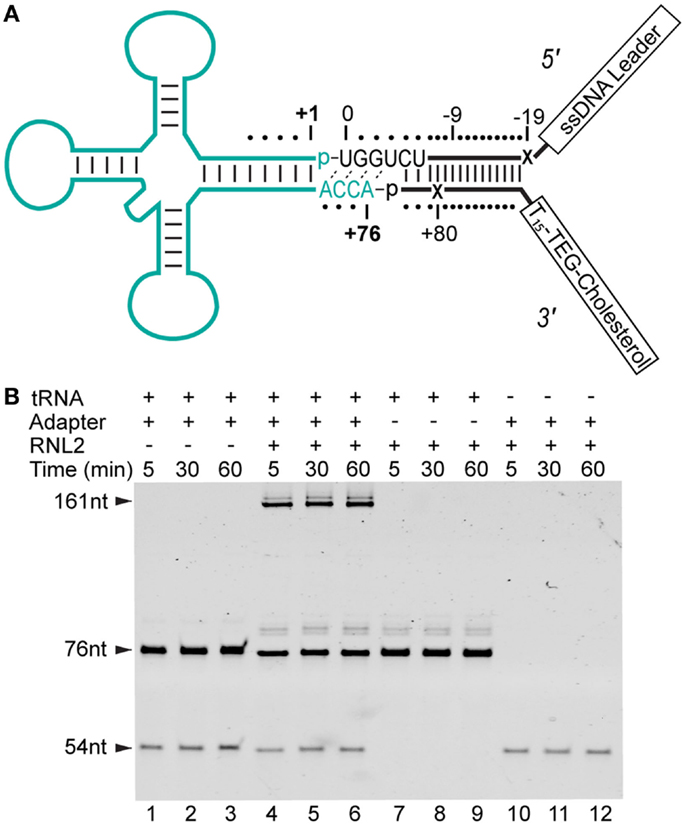 Strategy for constructing adapter-linked tRNA molecules for nanopore experiments. (A) The DNA/RNA chimeric adapter (black lines; RNA nucleotides black letters) was composed of a double stranded region and a four nucleotide RNA overhang (UGGU) ligated to the tRNA (cyan). The adapter specifically targets the conserved CCA tail of deacylated, native tRNA. Phosphodiester bonds formed by enzymatic ligation between the tRNA and the adapter are indicated by dashes between the 3′ terminal nucleotide and 5′ phosphate (p) at ligation junctions. The boxed tail regions were a single-stranded DNA (ssDNA) leader used for nanopore capture and a poly(dT) region with a terminal TEG-linked (triethylene glycol) cholesterol. This terminal TEG-cholesterol on the 3′ adapter strand was designed to localize substrate at the lipid bilayer. Tails are not drawn to scale. The adapter nucleotides are numbered relative to the first and last nucleotide of a canonical tRNA. The X’s indicate abasic positions. (B) Denaturing PAGE analysis of tRNA-adapter ligation reaction (see Materials and Methods). Time points are in minutes. Lanes 1–3, control reaction with S. cerevisiae tRNAPhe (76 nt) and adapter (54 nt leader strand), but absent RNA Ligase 2 (RNL2). Lanes 4–6, S. cerevisiae tRNAPhe incubated with the adapter and RNL2. Lanes 7–9, control reaction with RNL2 but absent adapter. Lanes 10–12, control reaction absent tRNAPhe. The 31 nt 3′ adapter oligonucleotide stains poorly (not shown). All subsequent nanopore experiments were conducted with complete ligation products after gel purification.

Using adapter-modified Escherichia coli tRNA(fMet) and tRNA(Lys), the researchers show that the nanopore signal during controlled translocation is dependent on the identity of the tRNA. This confirms that adapter-modified tRNA can translocate end-to-end through nanopores and provide the foundation for future work in direct sequencing of individual transfer RNA with a nanopore-based device. 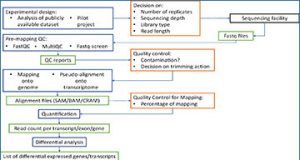 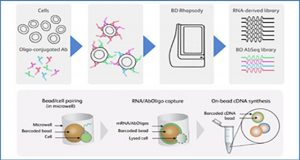 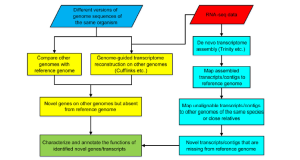