RNA-sequencing (RNA-seq) can generate millions of reads to provide clues for analyzing novel or abnormal alternative splicing (AS) events in cells. However, current methods for exploring AS events are still far from being satisfactory. Here, researchers from Zhejiang A & F University present Comprehensive AS Hunting (CASH), which constructs comprehensive splice sites including known and novel AS sites in cells, and identifies differentially AS events between cells. They illuminated the versatility of CASH on RNA-seq data from a wide range of species and also on simulated in silico data, validated the advantages of CASH over other AS predictors and exhibited novel differentially AS events. Moreover, they used CASH to identify SRSF10-regulated AS events and investigated the evolution of SRSF10-regulated splicing. The results showed that SRSF10-regulated splicing events are highly evolvable from chickens, mice to humans. However, SRSF10-regulated splicing model was observed to be immutable, in which SRSF10 binding to cassette exon promotes exon inclusion while binding to downstream exon induces exon skipping. Altogether, CASH can significantly improve the detection of AS events and facilitate the study of AS regulation and function in cells; the SRSF10 data first demonstrate a flexibility of SRSF10 with their regulated splicing events but an immutability of SRSF10-regulated splicing model to produce opposite AS outcomes in vertebrates. 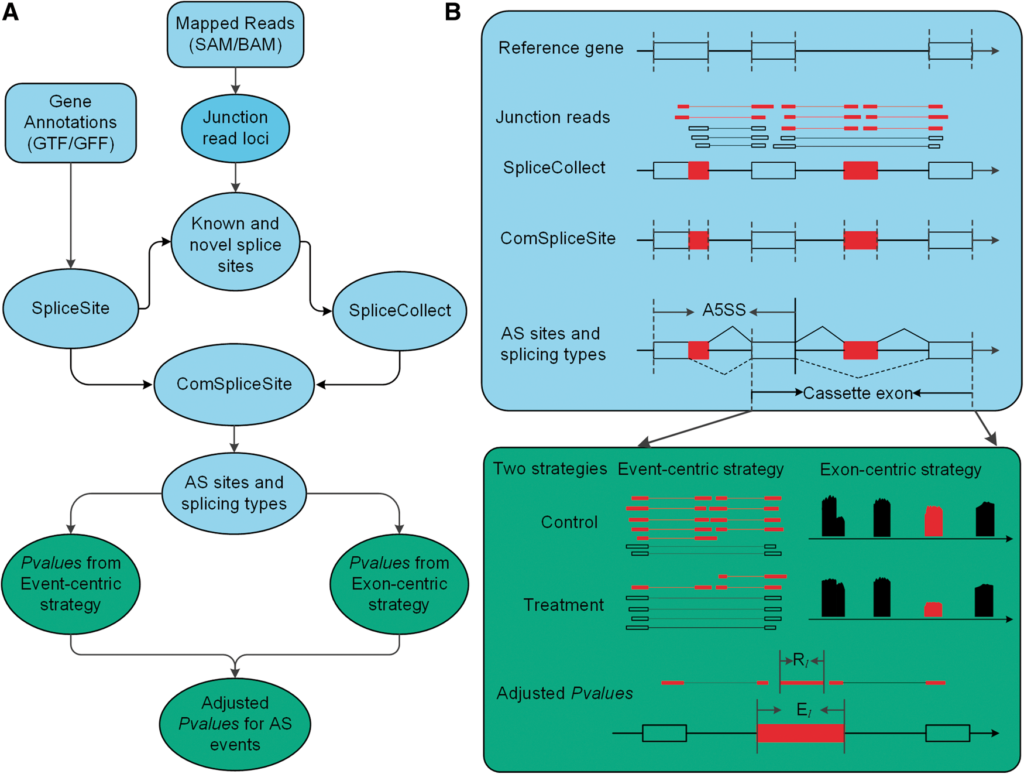 (A) CASH includes two major stages: SpliceCons (splice site construction) and SpliceDiff (differentially AS detection). (B) A sample gene with two novel AS events was illustrated (top frame). Note that annotated exons were shown in hollow rectangles and a novel cassette exon and an A5SS event predicted by RNA-seq junction reads were shown in solid rectangles. Junction reads in small hollow rectangles were produced from known exon–exon annotations, whereas the ones in small solid rectangles were produced from novel recognized splice sites. The novel cassette exon was shown with the computation of differential levels between control and treatment samples (bottom frame). Event-centric strategy uses the junction reads that support inclusion (in solid) and exclusion (in hollow) events, while exon-centric strategy uses RNA-seq coverage across the alternative exon (or part of exon) and the whole gene. A weighted equation with the parameters of alternative region length and reads length was adopted to calculate an adjust P-value for each AS event. SpliceSite: splice site; SpliceCollect: splice site collection; ComSpliceSite: comprehensive splice sites; Rl: the length of the mapped reads; El: the length of alternative exon (or part of exon).