Inside a tumor, chatter abounds. Multiple cell types are constantly communicating with each other, exchanging various types of information. Some are working together against the tumor, while others help the tumor grow. Researchers have a good handle on who the main players are, but it can be difficult to tell the good ones from the bad ones, and who’s communicating with whom. To make things even more complicated, sometimes good cells turn bad — and researchers don’t know why.

A team of Yale scientists has set out on an ambitious goal of figuring out this tangled web of networks and getting a closer look at what kinds of cell-to-cell interactions lead to effective anti-tumor responses, and which ones cause tumors to grow. Ideally, this level of understanding could lead to a time when a patient’s tumor could be analyzed and physicians would know how it might respond to certain treatments. The five-year project, led by Kathryn Miller-Jensen, associate professor of biomedical engineering and molecular, cellular and developmental biology, and Marcus Bosenberg, professor of dermatology, pathology, and immunobiology, recently received a $2.8 million grant from the National Cancer Institute.

“I think the question for the field — and the one we’re trying to answer with this grant — is what are these immune cells doing and why is that important?” Miller-Jensen said.

Immune cells can recognize and destroy cancer cells, but immunosuppression in the tumor’s microenvironment can thwart this built-in system. Immunotherapy, designed to restore anti-tumor immune activity, works for many cancer patients, but not all. By creating computational models of the networks, the researchers will try to identify potential targets for therapies with the aim of finding ways to reverse immunosuppression in non-responsive tumors.

The research is a form of “data-driven modeling,” and it’s a job that requires multiple cutting-edge technologies. The team will use single-cell RNA sequencing data from growing and regressing melanoma tumors to make computer models of the cellular networks. Single-cell sequencing is a relatively new technology that allows scientists to examine individual cells.

“You can take the cells from a tumor and sequence all of them individually,” Miller-Jensen said. “When you do that, you can say ‘I have T cells, fibroblasts, tumor cells…’ You can identify many cell types.” 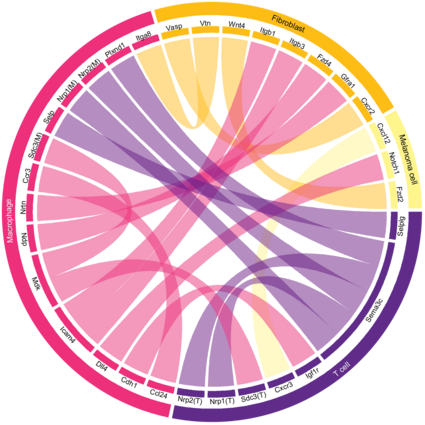 By itself, though, single-cell sequencing can tell researchers only so much. While it will give them clues about the receptors and ligands — parts of the cells that bind to each other — they also want to know if those ligands are actually being secreted by the cells they’re testing. That’s where another technology comes in — one that Miller-Jensen developed with Rong Fan, also a professor of biomedical engineering at Yale. Known as single-cell secretion assay, it measures the proteins known as cytokines, which are secreted by cells to signal to one another.

“With this, we can start to match cells up — ‘This cancer cell has high levels of a receptor and that immune cell has a high level of its ligand’ — so you can hypothesize that they would communicate.”

In a typical study, single-cell sequencing might reveal 10 to 20 types of a cell in a particular tumor. The Yale team, though, wants to know exactly what those different types are up to. For instance, if they find that a cluster of these cells are suppressing T cells — cancer-fighting white blood cells — then they’ve got a potential target to aim for.

“Just knowing that there’s 10 to 20 of these cells doesn’t really help us,” Miller-Jensen said. “We need to understand what they are doing.”

The study’s innovations also include mouse models that Bosenberg developed for testing melanoma therapies. Standard melanoma mouse models can’t elicit an immune response from the host, so they don’t accurately represent the human tumor microenvironment. Bosenberg designed the mouse models used in this study specifically for the evaluation of anti-tumor immune responses. As innovative as these mouse models are, the research team also needs to see how the therapies would work in humans, so they’ll compare their results to samples from an ongoing clinical trial at Yale. The melanoma patients in the trial are among the half who don’t respond well to the most common form of immunotherapy, known as checkpoint inhibitor therapy. They’re being treated with the same alterative therapy targeting different cell types that will be given to the mouse models.

“We’ll get some samples from those patients and do the same analysis on the human samples and see if there are things that look similar,” Miller-Jensen said. “Then, we can focus on what the connections are between the mouse models we have and the human patient samples. That way, we won’t go down some pathway that wouldn’t be relevant to humans.”

Harriet Kluger, professor of medicine, and co-director of Yale SPORE in Skin Cancer, is in charge of the clinical trials. She said the study is a good opportunity to use an in-house technology that could also be useful for other studies. She noted that the elaborate nature of the study is a good example of how complex the tumor’s microenvironment is.

“That’s why we need these fancy computational network models, so we can understand it,” she said. “There’s lots of different cells in there, and subsets of subsets that we weren’t even aware of three years ago.”

Another co-author of the study, Susan Kaech, was among the first to recognize the important, and often confusing, role of macrophages — a type of white blood cell found in tumors — in the immune system’s fight against cancer. Formerly an immunologist at Yale, Kaech is now director of the Nomis Center for Immunobiology and Microbial Pathogenesis at the Salk Institute. Tumor-associated myeloid cells and macrophages (TAMs), are one of this study’s focuses. TAMs have been shown to be a crucial element to an immune system’s response to cancer, but exactly what they do isn’t clear. They can both help and hurt when it comes to immunotherapy. In some cases, they can bolster a system’s anti-tumor toxicity. Other times, they help tumors grow by suppressing T cells. And confoundingly, the same macrophage can actually turn from good to bad; what triggers this change is unclear.

Melanoma is one disease where TAMs prove to be particularly tricky. Of the half of melanoma patients who don’t respond well to checkpoint inhibitor therapy, many have tumors with numerous macrophages. It’s a clue that gives the researchers something to work with, but Bosenberg said there are still many more questions. Are the macrophages stimulated by cytokines, and if so, which ones? Are they activating or suppressing the cancer-fighting T cells?

“It’s amazing how little we really know about how and why things respond, especially in humans, up to now,” said Bosenberg, who is also co-director of Yale SPORE in Skin Cancer. “There’s a number of elements that are probably in the conversation in the tumor microenvironment, and we just don’t know who is saying what. Once we understand those things, we can then add new drugs to current therapies to try to make it a better response for patients who haven’t responded.”