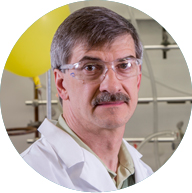 As an undergraduate at Latvia’s Riga Technical University, Eriks Rozners found himself drawn to RNA, challenged by the complexity of its molecular structure, which is more flexible and less stable than that of DNA. Nearly 30 years later, the Binghamton University scientist has become a leader in the field, with a pair of recent grants from the National Institutes of Health and the National Science Foundation to keep doing what he does best: fundamental research into the chemistry and biochemistry of nucleic acids.

“For a long time, people believed that RNA was simply a middleman, a worker that enabled the flow of genetic information from DNA to proteins,” says Rozners, an associate professor of chemistry. “Now, with the sequencing of the human genome, we know that only 2 percent of DNA encodes for proteins, while 70 to 90 percent is used to make RNA. That’s a lot of RNA, and even if we don’t yet understand it completely, we’re coming to appreciate that RNA is involved in the decision-making process of how cells develop.”

RNA, he notes, is an active player in cell development that determines which cells become skin, which become muscle, which become bone. “My lab is designing tools for the molecular recognition of different kinds of RNA, which can look very similar in cells, but are still significantly different,” Rozners says. “Such tools will enable studies on the various RNAs in their native environment, live cells.”

In the first project, “Amide-Modified RNA: Synthesis, Structure and Potential for RNA Interference,” Rozners and his collaborators — Martin Egli of Vanderbilt University, Kaizhang He of Dharmacon and Scott Kennedy of the University of Rochester — received a $1.5 million, four-year renewal grant from the National Institute of General Medical Sciences (NIGMS) to continue investigating the possibility of an artificial biopolymer that can mimic the properties of RNA.

In the second three-year project, “Sequence Selective Recognition of Double-Stranded Non-Coding RNA via Triplex Forming PNA,” the National Science Foundation awarded Rozners $414,767 to develop synthetic compounds that can differentiate between types of RNA by reading their sequence-specific nucleic codes. These compounds will be tested in collaboration with Paul Agris of the University at Albany, another SUNY institution.

Both projects are still years away from finding hands-on applications. But their potential, either as new research tools or as new medicines to target diseases that involve aberrant RNA expression, is enormous.

“This is difficult work, and Eriks is one of the few people who can do it, because it tends to be very elaborate, very complicated and very expensive” says Egli, an expert on X-ray crystallography. “Eriks is very meticulous, and has gone much further than previous attempts to study amides. He’s taking a much more holistic approach, focusing on the basic science of chemically modified nucleic acids and looking at fundamental changes all the way down to the atomic level.”