When using CLEAR transcripts vs. using all transcripts in CLL samples, downstream analyses revealed a higher proportion of shared transcripts across three input amounts and improved principal component analysis (PCA) separation of the two cell types. In mouse DG samples, CLEAR identifies noisy transcripts and their removal improves PCA separation of the anticipated cell populations. In addition, CLEAR was applied to two publicly-available datasets to demonstrate its utility in lcRNA-seq data from other institutions. If imputation is applied to limit the effect of missing data points, CLEAR can also be used in large clinical trials and in single cell studies. 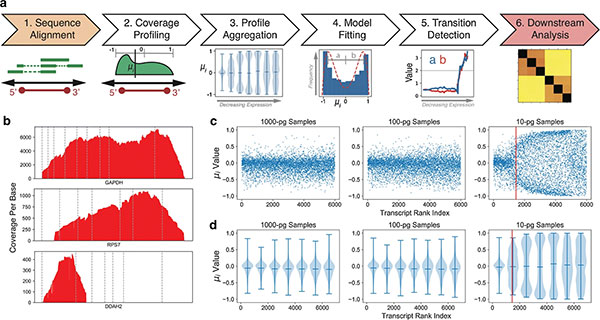 a Data analysis workflow using CLEAR to preprocess lcRNA-seq data. Step 1: Trimmed lcRNA-seq reads are aligned to the reference genome; Step 2: μi, the mean of the positional distribution of aligned reads along each individual transcript, is determined; Step 3: Transcript positional means, μi, (y-axis) are ranked and then binned by the transcript read coverage (x-axis). When μi of a bin is ≈ 0, the read distribution is symmetrical along the length of the transcript. When μi within a bin develops a bimodal distribution with a mode toward + 1 (TTS) and − 1 (TSS), its values will deviate from 0; Step 4: All available transcripts, binned into groups of 250 are fitted to a bimodal distribution model. The emergence of a bimodal distribution identifies when aggregate μi start to deviate from a unimodal distribution around the center of the transcripts, indicated by a change in the fitting parameters a and b; Step 5: When either of the model parameters exceed a value of 2 (indicated by a gray line), transcripts beyond that point are excluded by CLEAR for differential gene expression and other downstream analysis; Step 6: CLEAR transcripts are used in downstream between-group analyses such as hierarchical clustering; b example lcRNA-seq read coverage plots. Read coverage plot for GAPDH depicts a transcript with μi ~ 0, RPS7 depicts a transcript close to the CLEAR cutoff, while DDAH2 depicts a transcript deemed too noisy by CLEAR; c CLEAR profiles for 10-, 100- and 1000-pg input mass lcRNA-seq data. The value of μi is plotted for the 7000 highest expressed primary transcripts for three representative samples. The red line depicts the CLEAR filtering threshold; d violin plots of the same data as shown in c. The end marks indicate the window extrema and the middle bar indicates the mean

lcRNA-seq coupled with CLEAR is widely used at in the developers’ labs for profiling immune cells (circulating or tissue-infiltrating) for its transcript preservation characteristics. CLEAR fills an important niche in pre-processing lcRNA-seq data to facilitate transcriptome profiling and DEG analysis. The developers demonstrate the utility of CLEAR in analyzing rare cell populations in clinical samples and in murine neural DG region without sample pooling.