Understanding the regulation of gene expression, including transcription start site usage, alternative splicing, and polyadenylation, requires accurate quantification of expression levels down to the level of individual transcript isoforms. To comparatively evaluate the accuracy of the many methods that have been proposed for estimating transcript isoform abundance from RNA sequencing data, researchers at the University of Basel and Swiss Institute of Bioinformatics have used both synthetic data as well as an independent experimental method for quantifying the abundance of transcript ends at the genome-wide level. 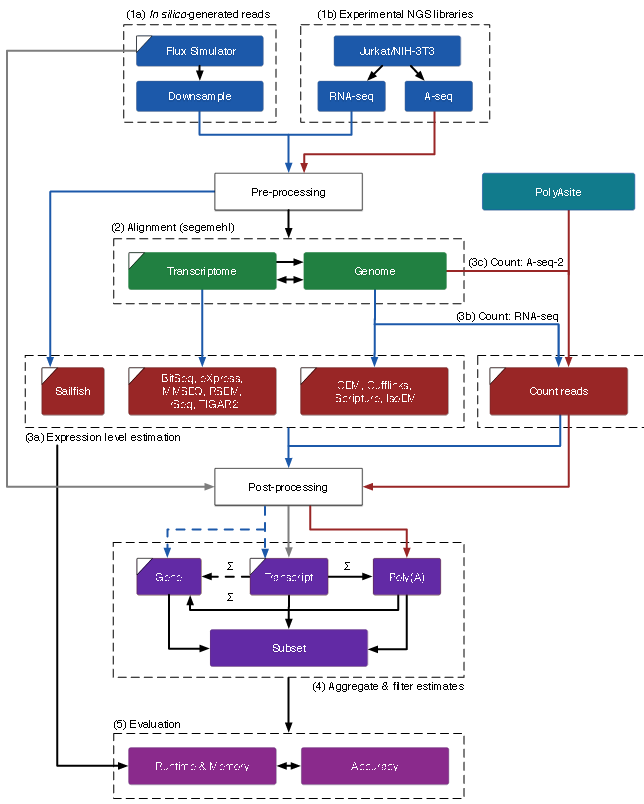 Overview of the study design. Sequencing data (blue boxes; 1) were generated synthetically (Flux Simulator; left side) or experimentally (right side) from human or mouse cells, following either a regular RNA-seq (blue arrows) or an A-seq-2 3′ end sequencing protocol (red arrows). 3′ adapters (if present) and poly(A)-tails were removed from read sequences (‘pre-processing’), and the trimmed reads were then aligned against both the genome and the transcriptome (green boxes; 2). Genome alignments were supplemented with read alignments covering splice junctions by converting transcriptome alignments to genome coordinates. Genome and transcriptome alignments were then compared to ensure that only the best alignments were kept for each read. Based on the remaining alignments (genome or transcriptome, depending on requirements), expression estimates were computed (red boxes) either with the surveyed, model-based methods (3a), or count-based methods (RNA-seq: 3b, A-seq-2: 3c). Subsequently (‘post-processing’), the raw numbers produced by the latter methods, as well as the true number of expressed transcripts in the synthetic dataset (as provided by Flux Simulator; gray arrow), were normalized, and the normalized expression estimates were extracted from the outputs of the surveyed model-based inference methods. Depending on the downstream analysis, expression estimates for transcripts and 3′ end processing sites (‘Poly(A)’) were aggregated and filtered (purple boxes; 4). To evaluate the performance of the surveyed methods (magenta boxes; 5), the accuracy of the surveyed transcripts abundance inference methods were analyzed by comparing the produced estimates to either the ground truth expression (synthetic data) or the A-seq-2-based estimates (experimental data). Additionally, runtime and memory consumption was evaluated. Steps at which either transcript/gene annotations (GENCODE) or transcript sequences (ENSEMBL) were used are marked with white triangles at the upper left corners. Refer to the Methods section and the main text for further details.

The researchers found that many tools have good accuracy and yield better estimates of gene-level expression compared to commonly used count-based approaches, but they vary widely in memory and runtime requirements. Nucleotide composition and intron/exon structure have comparatively little influence on the accuracy of expression estimates, which correlates most strongly with transcript/gene expression levels.

As many methods for quantifying isoform abundance with comparable accuracy are available, a user’s choice will likely be determined by factors such as the memory and runtime requirements, as well as the availability of methods for downstream analyses. Sequencing-based methods to quantify the abundance of specific transcript regions could complement validation schemes based on synthetic data and quantitative PCR in future or ongoing assessments of RNA-seq analysis methods.

To facilitate the reproduction and further extension of this study, the researchers  provide datasets, source code, and an online analysis tool on a companion website, where developers can upload expression estimates obtained with their own tool to compare them to those inferred by the methods assessed here.

Availability – Datasets, source code, and an online analysis tool on a companion website are avilable at: http://www.clipz.unibas.ch/benchmarking/