The complexity of the human brain presents scientists with immense challenges as they try to find new treatments for a host of diseases and conditions. But the advent of a new technology known as single-cell RNA sequencing is opening a window into how the brain works.

Researchers at the Translational Genomics Research Institute (TGen), an affiliate of City of Hope, and a Silicon Valley startup called Circuit Therapeutics Inc. have combined to look deep inside the brain at a structure known as the striatum, which not only is responsible for controlling how we move, but also contributes to the brain’s decision-making and the initiation of action.

Nearly 95 percent of the cells that make up the striatum are known as medium spiny neurons (MSN), whose health or malfunction is associated with many psychiatric and neurodegenerative diseases, including Parkinson’s disease, Huntington’s disease, schizophrenia, drug addiction and ADHD.

In one of the first investigations of its kind, TGen and Circuit Therapeutics have developed exacting methods for examining these MSN cells, and in the process identified a specific gene known as Chrm4 as one of several potential therapeutic drug targets, according to a study published June 15 in the journal Frontiers in Cellular Neuroscience.

“Understanding the molecular composition and gene expression of individual MSN cells are of critical importance to gaining insights into how they work and how we can identify drug targets to treat neurological dysfunctions,” said Dr. Matt Huentelman, TGen Professor of Neurogenomics. “In this study, we analyzed and simplified methods for isolating single MSN cells in the striatum, using newly available technology to examine them with unprecedented resolution.” 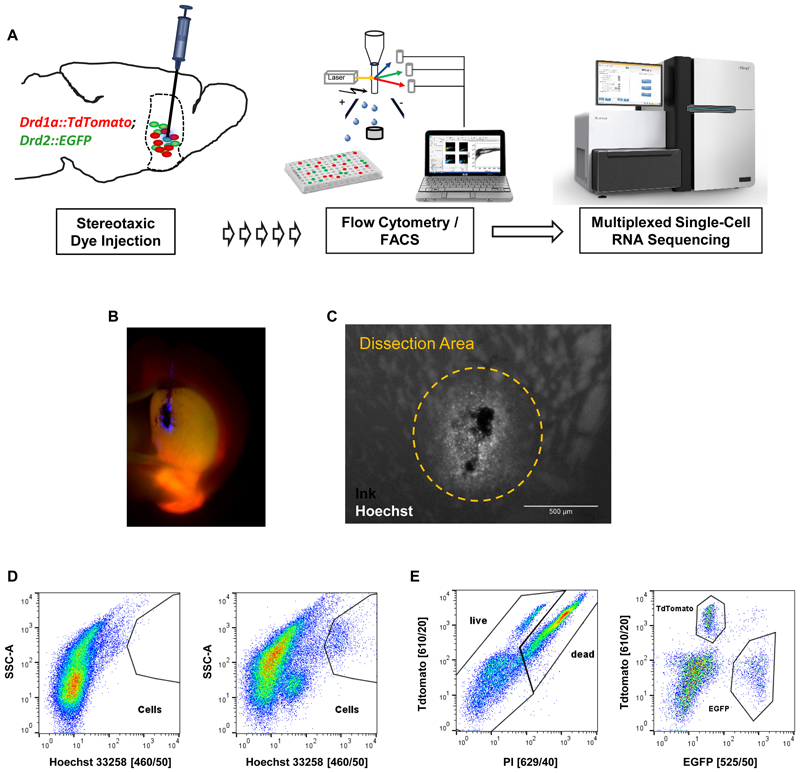 (A) Schematic workflow for labeling cells in vivo in a cell type- and region-specific manner. BAC-transgenic reporters label the two major striatal MSN subpopulations based on their expression of the D1 and D2 dopamine receptors. Stereotaxic injection of the nuclear dye Hoechst 33258 allows specific labeling of cells in the DMS. Cells are isolated by FACS and RNA-Seq libraries produced for downstream Illumina sequencing. (B) Fluorescence microscopy image of a coronal section showing the right hemisphere of a double transgenic animal injected with a mixture of India ink (for visual guidance of tissue dissection) and Hoechst 33258 in the dorsomedial striatum. (C) Magnified view of an injection site. Note that the small molecule Hoechst 33258 spreads slightly further than the larger carbon particles contained in India ink. The approximate dissection area is indicated. (D) FACS data (comparable particle numbers) showing nuclear stain by Hoechst 33258 from a non-injected C57BL/6 control animal (left) and an injected double-transgenic animal (right). (E) Left: cells based on Hoechst 33258 gating shown in (D) assayed for cell death based on propidium-iodide (PI). Due to partial overlap of TdTomato and propidium-iodide with available filters, the gating was done setting TdTomato against propidium-iodide channels. Right: live cells based on left panel show Drd1a-TdTomato and Drd2-EGFP labeled MSN subpopulations within the dorsomedial striatum.

“Understanding the molecular properties of neural circuitry in the brain is of great interest to neuroscience drug discovery,” said Dr. Thomas Portmann, Director of Neurobiology and Transcriptomics at Circuit Therapeutics Inc. “Being able to understand how individual cells form key neural circuits is rapidly advancing our knowledge about the molecular signatures of the brain, and about druggable targets for development of future therapies.”