The main goal of the whole transcriptome analysis is to correctly identify all expressed transcripts within a specific cell/tissue – at a particular stage and condition – to determine their structures and to measure their abundances. RNA-seq data promise to allow identification and quantification of transcriptome at unprecedented level of resolution, accuracy and low cost.

Several computational methods have been proposed to achieve such purposes. However, it is still not clear which promises are already met and which challenges are still open and require further methodological developments.

Researchers at the Institute for Applied Mathematics, Italy carried out a simulation study to assess the performance of 5 widely used tools, such as: CEM, Cufflinks, iReckon, RSEM, and SLIDE.

Moreover, comparisons were carried out using the methods in three different modes of action. In the first mode, the methods were forced to only deal with those isoforms that are present in the annotation; in the second mode, they were allowed to detect novel isoforms using the annotation as guide; in the third mode, they were operating in fully data driven way (although with the support of the alignment on the reference genome).

In the latter modality, precision and recall are quite poor. On the contrary, results are better with the support of the annotation, even though it is not complete.

Both detection and quantification of all isoforms from RNA-seq data are still hard problems and they are affected by many factors. 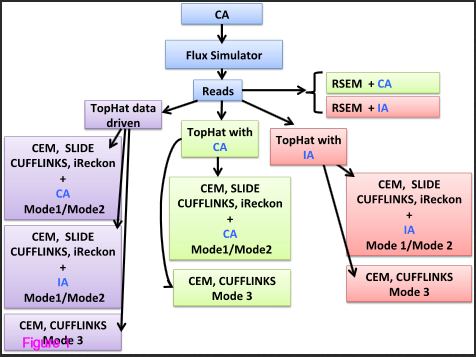 Overall, the performance significantly changes since it depends on the modes of action and on the type of available annotation. Results obtained using complete or partial annotation are able to detect most of the expressed isoforms, even though the number of false positives is often high.