Alternative splicing (AS) is a post-transcriptional regulatory mechanism for gene expression regulation. Splicing decisions are affected by the combinatorial behavior of different splicing factors that bind to multiple binding sites in exons and introns. These binding sites are called splicing regulatory elements (SREs). Researchers at Virginia Tech have developed CoSREM (Combinatorial SRE Miner), a graph mining algorithm to discover combinatorial SREs in human exons. Their model does not assume a fixed length of SREs and incorporates experimental evidence as well to increase accuracy. CoSREM is able to identify sets of SREs and is not limited to SRE pairs as are current approaches.

The new algorithm can identify different combinations of splicing enhancers and silencers without assuming a predefined size or limiting the algorithm to find only pairs of SREs. Our approach opens new directions to study SREs and the roles that AS may play in diseases and tissue specificity. 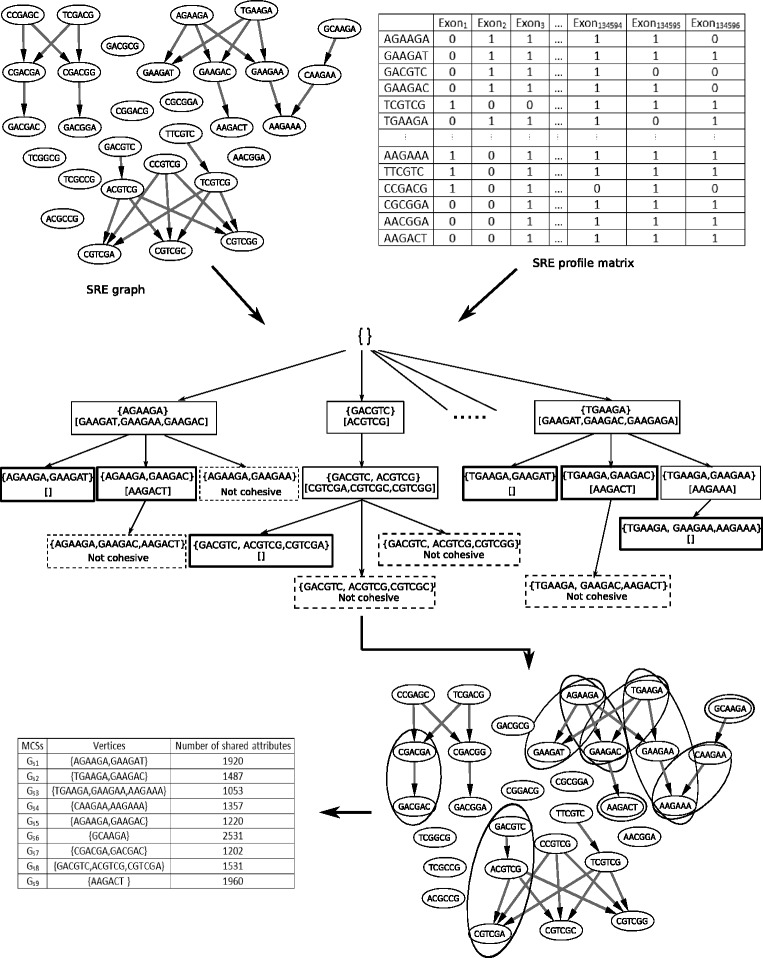 An example of mining cohesive subgraphs. The graph at the top left corner represents the SRE graph GUESE. We choose R = 30 which means the SRE graph contains the top 30 6-mers in rank. The matrix on the right is the SRE profile matrix P ESE. Setting α=1000 means that the connected vertices should co-occur in at least 1000 exons to be considered a cohesive subgraph. The tree in the middle shows how GenMCS proceeds. The bold boxes represent cohesive subgraphs. The dotted boxes represent subgraphs that are not cohesive and the remaining branch will be pruned. The output is 9 subgraphs as illustrated in the bottom graph.