Researchers at Karolinska Institutet in Sweden have developed a sequencing technology for cost-effective surveillance of the global spread of new SARS-CoV-2 variants. The technique is presented in the scientific journal Nature Communications.

Since the onset of the pandemic, thousands of viral genomes have been sequenced to reconstruct the evolution and global spread of the coronavirus. This is important for the identification of particularly concerning variants that are more contagious, pathogenic, or resistant to the existing vaccines.

For global surveillance of the SARS-CoV-2 genome, it is crucial to sequence and analyse many samples in a cost-effective way. Therefore, researchers in the Bienko-Crosetto laboratory at Karolinska Institutet and Science for Life Laboratory (SciLifeLab) in Sweden have developed a new method, named COVseq, that can be used for surveillance of the viral genome on a massive scale at a low cost.

First, many copies of the viral genome are created using so-called multiplex PCR (polymerase chain reaction). The samples are then labelled and pooled together in the same sequencing library, using a previous method developed in the Bienko-Crosetto laboratory and now adapted for SARS-CoV-2 analysis.

“By performing reactions in very small volumes and pooling together hundreds of samples into the same sequencing library, we can sequence potentially thousands of viral genomes per week at a cost of less than 15 dollars per sample,” says Ning Zhang, postdoctoral researcher at the Department of Medical Biochemistry and Biophysics, Karolinska Institutet and co-first author together with PhD students Michele Simonetti and Luuk Harbers at the same department.

Comparative analyses of 29 SARS-CoV-2 positive samples revealed that COVseq had a similar ability as the standard method to identify small changes in the genome. Analyses of 245 additional samples showed that COVseq also had a high ability to detect emergent coronavirus variants of potential concern. The key advantage of COVseq over existing methods is cost-effectiveness. 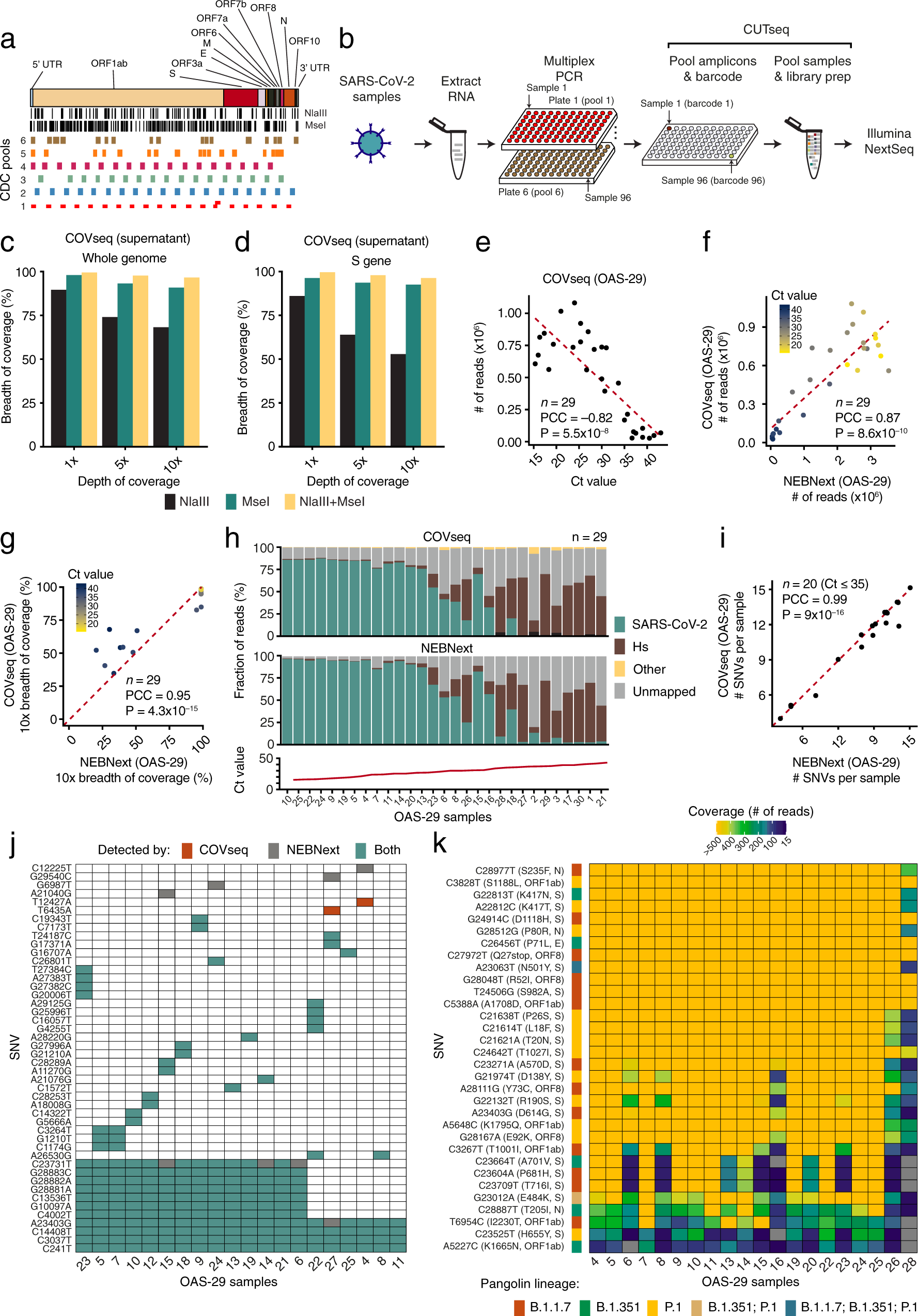 a Location along the Severe Acute Respiratory Syndrome Coronavirus 2 (SARS-CoV-2) genome (top) of MseI and NlaIII recognition sites (vertical black bars) and Centers for Disease Control and Prevention (CDC) multiplexed PCR assay amplicon pools (colored rectangles). b Schematic high-throughput COVseq workflow. c Percentage of bases in the SARS-CoV-2 reference genome covered by COVseq at varying sequencing depths (SE150 sequencing) for three different libraries prepared from RNA extracted from the supernatant of a viral culture, using genome digestion with one or two restriction enzymes (MseI and NlaIII). d Same as in (c), but for the S gene encoding the spike protein. e Inverse correlation between the cycle threshold (Ct) determined by RT-PCR and the number of reads, for OAS-29 samples (see Supplementary Data 4) sequenced by COVseq (MiSeq PE300). f Correlation between the total number of reads obtained with COVseq vs. NEBNext for the same samples in (e). g Correlation between the breadth of coverage at 10×× sequencing depth obtained by COVseq vs. NEBNext for the same samples in (e). h Percentage of sequencing reads aligned to the SARS-CoV-2 reference genome, human reference genome (Hs), other genomes or unmapped, for the same samples in (e). i Correlation between the number of single-nucleotide variants (SNVs) per sample detected by COVseq (PE300) vs. NEBNext (SE75) in 20 (n) out of 29 OAS-29 samples with Ct ≤ 35. j Matrix showing the SNVs detected by COVseq, NEBNext, or both in the 20 OAS-29 samples with Ct ≤ 35. k Heatmap of the depth of coverage at the genomic positions of all the SNVs defining the UK (B.1.1.7), South African (B.1.351) and Brazilian (P.1) variants of concern (VOC) for the 20 OAS-29 samples with Ct ≤ 35 sequenced by COVseq.

“Our inexpensive method could immediately be used for SARS-CoV-2 genomic surveillance by public health agencies and could also be easily adapted to other RNA viruses, such as influenza and dengue viruses,” says Nicola Crosetto, senior researcher at the Department of Medical Biochemistry and Biophysics, Karolinska Institutet, and last author of the paper.