Next-generation sequencing has been a huge benefit to investigators studying non-model species. High-throughput gene expression studies, which were once restricted to animals with extensive genomic resources, can now be applied to any species. Transcriptomic studies using RNA-Seq can discover hundreds of thousands of transcripts from any species of interest. The power and limitation of these techniques is the sheer size of the dataset that is acquired. Parsing these large datasets is becoming easier as more bioinformatic tools are available for biologists without extensive computer programming expertise. Gene annotation and physiological pathway tools such as Gene Ontology and Kyoto Encyclopedia of Genes and Genomes (KEGG) Orthology enable the application of the vast amount of information acquired from model organisms to non-model species. While noble in nature, utilization of these tools can inadvertently misrepresent transcriptomic data from non-model species via annotation omission. Annotation followed by molecular pathway analysis highlights pathways that are disproportionately affected by disease, stress, or the physiological condition being examined. Problems occur when gene annotation procedures only recognizes a subset, often 50% or less, of the genes differently expressed from a non-model organisms. Annotated transcripts normally belong to highly conserved metabolic or regulatory genes that likely have a secondary or tertiary role, if any at all, in immunity. They appear to be disproportionately affected simply because conserved genes are most easily annotated. Evolutionarily induced specialization of physiological pathways is a driving force of adaptive evolution, but it results in genes that have diverged sufficiently to prevent their identification and annotation through conventional gene or protein databases.

Researchers from the University of Prince Edward Island highlight some of the challenges faced when annotating crustacean immune genes by using an American lobster (Homarus americanus) transcriptome as an example. Immune genes have evolved rapidly over time, facilitating speciation and adaption to highly divergent ecological niches. Complete and proper annotation of immune genes from invertebrates has been challenging. Modulation of the crustacean immune system occurs in a variety of physiological responses including biotic and abiotic stressors, molting and reproduction. A simple method for the identification of a greater number of potential immune genes is proposed, along with a short introductory primer on crustacean immune response. 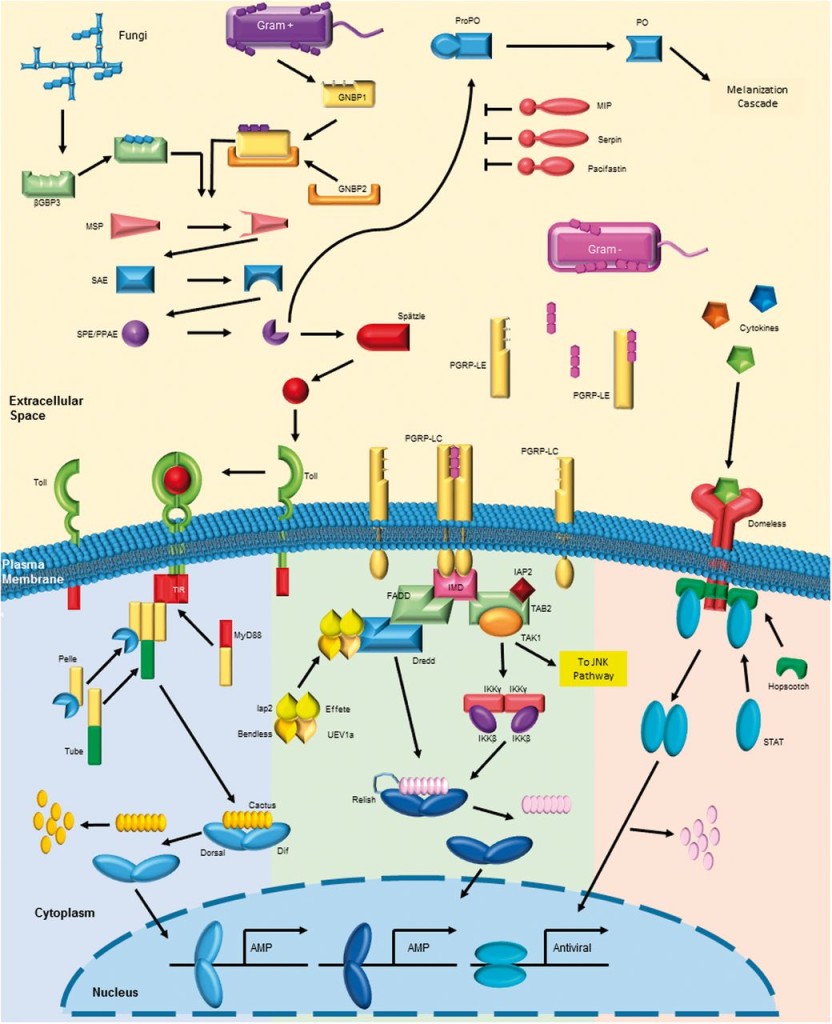 A model of crustacean TLR, Imd, JAK-STAT, and proPO activation pathways. This idealized model of immune signaling is intended to represent some of the features of a crustacean’s immune signaling pathway without reflecting any single crustacean species. Most crustaceans will have multiple isoforms with additions and deletions of the depicted immune molecules, but it remains useful for comparative purposes.