RNA-seq data analysis has revealed abundant alternative splicing in eukaryotic mRNAs. However, splicing is only one of many processing events that transcripts may undergo during their lifetime. Researchers from the Institute for Integrative Biology of the Cell, CNRS present here RNAprof (RNA profile analysis), a program for the detection of differential processing events from the comparison of RNA-seq experiments. RNAprof implements a specific gene-level normalization procedure and compares RNA-seq coverage profiles at nucleotide resolution to detect regions of significant coverage differences, independently of splice sites or other gene features. The researchers used RNAprof to analyze the effect of alternative-splicing regulators NSRa and NSRb on the Arabidopsis thaliana transcriptome. A number of intron retention events and alternative transcript structures were specifically detected by RNAprof and confirmed by qRT-PCR. Further tests using a public Mus musculus RNA-seq dataset and comparisons with other RNA isoform predictors showed that RNAprof uniquely identified sets of highly significant processing events as well as other relevant library-specific differences in RNA-seq profiles. This highlights an important layer of variation that remains undetected by current protocols for RNA-seq analysis. 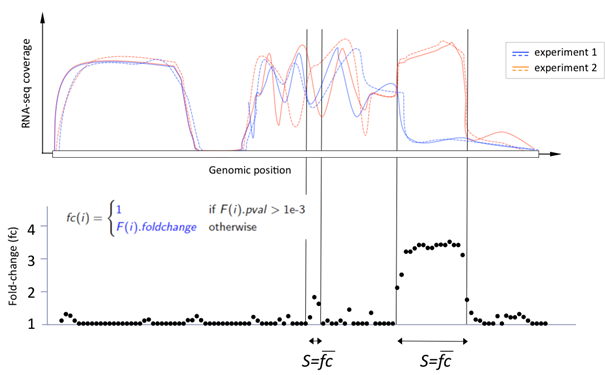 Upper frame: four RNA-seq coverage profiles from 2 experiments (x2 replicates) mapped to an imaginary transcription unit, after RNAprof normalization. Lower frame: each dot represents the computed fold change in expression between experiments 1 and 2 at each locus position. Fold changes and p-values are computed using the DESeq package. Any fold change associated to an adjusted p-value > 1e-3 is set to 1, as explained in the fc(i) function. Vertical lines indicate blocks of significant fold changes selected as “events”. The score S of an event is the average of fc(i) in the block. The p-value of an event is computed using DESeq based on the average count per position in the event.