Does autism begin in the womb?

Autism (autism spectrum disorder) is a developmental neurological disorder that remains largely unexplored despite the rapidly increasing number of patients. Immune abnormalities, now considered the cause of many diseases, also play an important role in the development of autism. Brain inflammation and disturbances of the peripheral immune system are frequently observed in autistic patients. Furthermore, immune abnormalities are accompanied by abnormalities in the intestinal microbiota, which is also thought to be involved in the pathogenesis of the disease via the brain-gut axis. However, the essential mechanisms behind these immune abnormalities have yet to be elucidated.

Given the critical developmental stages of immune insults and the extensive involvement of the immune system in the development of autism, a research team from the RIKEN Center for Biosystems Dynamics Research and the Kobe University Graduate School of Medicine hypothesized that a common etiology underlies the widespread immune dysregulation and originates in different types of progenitor cells. The analysis focused on the hematopoietic cells from which immune cells are derived, as well as on the yolk sac (YS) and the aorta-gonad-mesonephros (AGM), which are involved in hematopoiesis during the fetal stage. These results seek a common ancestor of inflammation in the brain and abnormalities in the peripheral immune system. In this study, BTBR mice were used as an idiopathic model for autism.

Single-cell RNA sequencing (sc-RNA seq) of BTBR mice traced the origin of immune abnormalities back to the embryonic stages of the yolk sac (YS) and aorta-gonad-mesonephros (AGM) and identified where macrophages (microglia) and peripheral immune cells differentiate. Definitive hematopoiesis in YS and AGM single-cell level analysis successfully identified pathological mechanisms at the molecular level within rare progenitor cells in the early stages of development. Namely, the researchers found a common mechanism of transcriptional regulation through HDAC1, a histone deacetylase, underlying these pathologies. 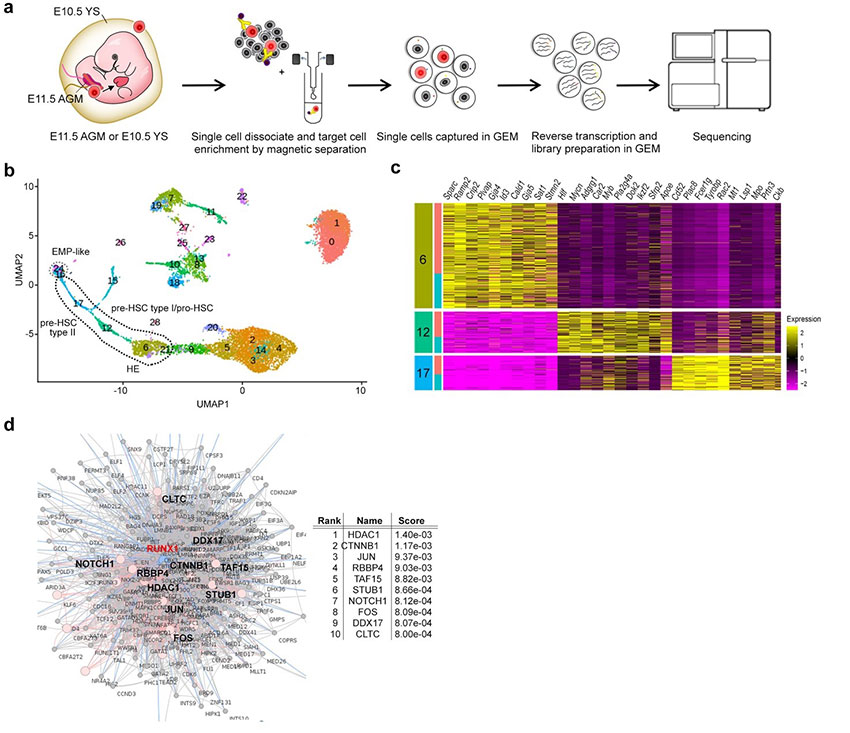 a: Experimental schematic. Cells are isolated from the fetal yolk sac and AGM and their transcripts are sequenced by next-generation sequencing.
b: Cell groups from single-cell analysis of AGM progenitor cells are shown.
c: Heatmap of top 10 enriched genes in the three cell groups (6, 12, 17) in b.
d: Gene enrichment analysis based on protein-protein inter-network of RUNX1, a transcription factor essential for the endothelial-to-hematopoietic transition (EHT), in which vascular endothelial cells give rise to hematopoietic stem cells. 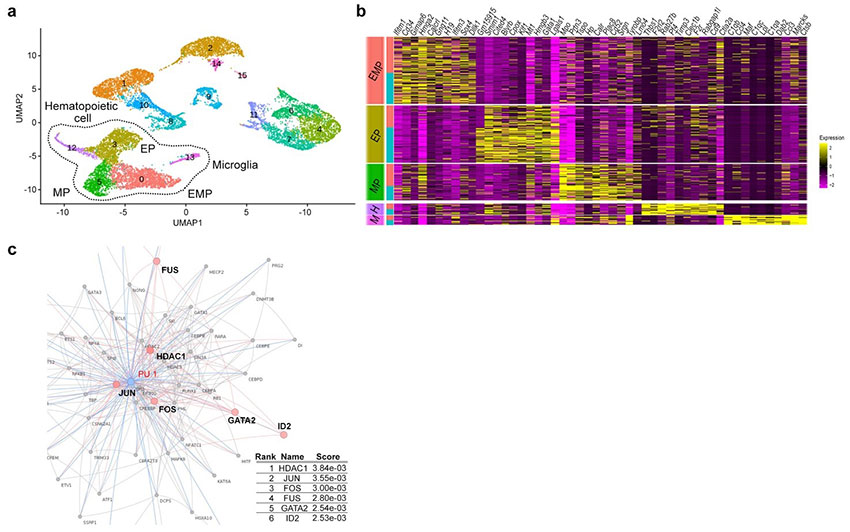 a: Cell groups from single-cell analysis of yolk sacs.
b: Heat map of the top 10 genes enriched in the five cell groups in a.
c: Protein-protein interaction of PU.1, a transcription factor important for microglial development. Network-based gene enrichment analysis

The research team has also shown that manipulating epigenetic mechanisms during specific developmental stages can restore immune abnormalities in the brain and peripheral tissues. Namely, they identified histone deacetylase HDAC1 as a common mechanism. Administrating inhibitors of this histone (sodium butyrate or Romidepsin) during the fetal stage in BTBR mice suppressed elevated inflammatory cytokines and microglial activation.

They further demonstrated that dysregulated immunity can determine gut dysbiosis of specific profiles in autistic model mice, which make the potential biomarkers of Treg and gut dysbiosis a means to categorize the immune-dysregulated ASD subtype.

These findings not only provide the missing piece to solve the long-time puzzle of systemic immune dysregulation in autism, but also hint the role of epigenetic disturbance as common etiology among different autism models of environmental risk factors. Furthermore, to develop precision medicine for ASD in the future, ASD subtyping according to the pathogenesis mechanism is a key first step to resolve the heterogeneity of ASD and to open up a new avenue for ASD treatment.