from The Broad Institute by Tom Ulrich –

Researchers struggled in the past to study expression in neurons and other cells from complex tissues, like the brain, at the single-cell level. This was because the procedures for isolating the cells affected their RNA content and did not always accurately capture the true proportions of the cell types present in a sample. Moreover, the procedures did not work for frozen archived tissues. sNuc-Seq bypassed those problems by using individual nuclei extracted from cells as a starting point instead.

sNuc-Seq, however, is a low-throughput technology, using 96- or 384-well plates to collect and run samples. To scale the method up to the level needed in order to efficiently study thousands of nuclei at a time, the team turned to microfluidics. Their inspiration: Drop-Seq, a single-cell RNA-seq (scRNAseq) technique that encapsulates single cells together with DNA barcoded-beads in microdroplets to greatly accelerate expression profiling experiments and reduce cost.

To test the new method’s accuracy and speed, the team successfully benchmarked DroNc-Seq against Drop-Seq, sNuc-Seq, and other lower throughput scRNAseq methods using a mouse cell line and mouse brain tissue. They also applied it to human brain tissue collected by the Genotype-Tissue Expression (GTEx) Project, finding that they could a) identify expression signatures unique to neurons, glial cells, and other cell types in the brain (including rare types), and b) differentiate between closely related cell subtypes.

DroNc-Seq’s robustness and accuracy suggest it could be a valuable addition to the stable of technologies being used as part of the Human Cell Atlas and other scRNAseq-based efforts. 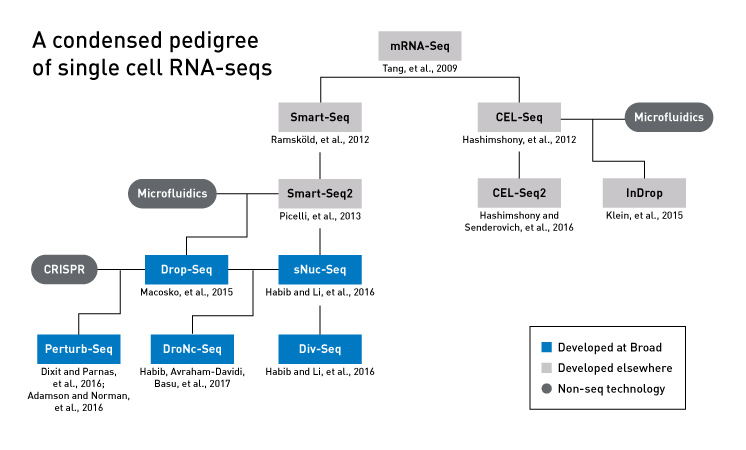 This family tree captures just a sampling of single-cell and single-nucleus RNA sequencing technologies that have burst onto the scene over the last eight years. (Credit: Susannah M. Hamilton and Tom Ulrich, Broad Communications)