The SARS-CoV-2 pandemic has challenged humankind’s ability to quickly determine the cascade of health effects caused by a novel infection. Even with the unprecedented speed at which vaccines were developed and introduced into society, identifying therapeutic interventions and drug targets for patients infected with the virus remains important as new strains of the virus evolve, or future coronaviruses may emerge that are resistant to current vaccines. The application of transcriptomic RNA sequencing of infected samples may shed new light on the pathways involved in viral mechanisms and host responses.

Researchers at University of California at Santa Cruz describe the application of the previously developed “dual RNA-seq” approach to investigate, for the first time, the co-regulation between the human and SARS-CoV-2 transcriptomes. Together with differential expression analysis, we describe the tissue specificity of SARS-CoV-2 expression, an inferred lipopolysaccharide response, and co-regulation of CXCL’s, SPRR’s, S100’s with SARS-CoV-2 expression. Lipopolysaccharide response pathways in particular offer promise for future therapeutic research and the prospect of subgrouping patients based on chemokine expression that may help explain the vastly different reactions patients have to infection. Taken together these findings highlight unappreciated SARS-CoV-2 expression signatures and emphasize new considerations and mechanisms for SARS-CoV-2 therapeutic intervention. 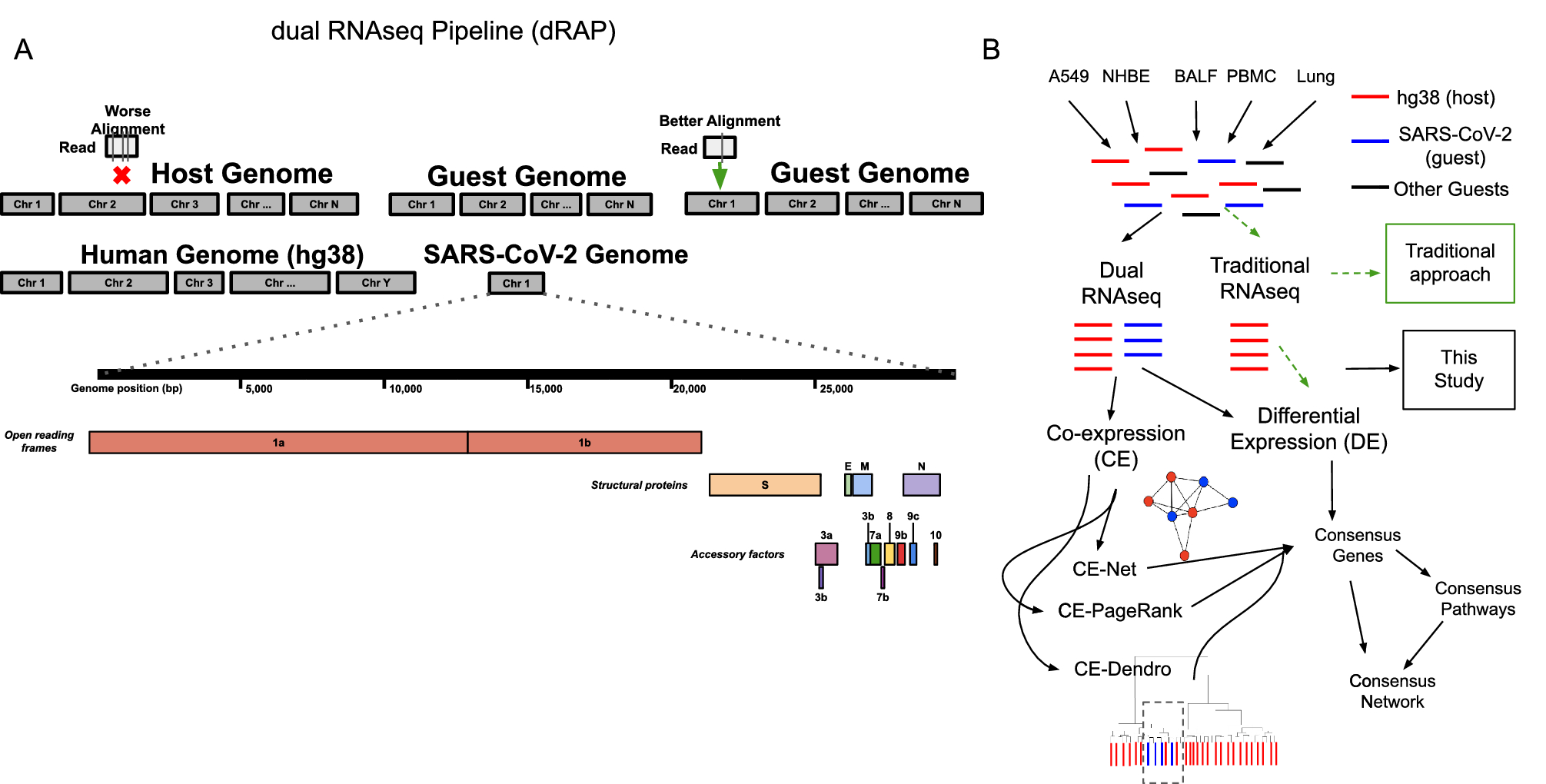 (A) Illustration of the dual RNAseq alignment pipeline (dRAP) using both host and guest genomes. Dual RNAseq creates a single reference index for RNAseq read alignment with STAR by appending “guest” genomes to the host genome allowing for simultaneous alignment of reads with multiple transcriptomes where the best overall alignment is selected. An example is shown where dRAP can resolve that a single read has a better match to the guest genome with only 1 mismatch (green arrow) compared to the host genome with 3 mismatches (red vertical lines). The SARS-CoV-2 guest genome (NC_045512v2) is depicted with its annotated set of genes designated as open reading frames, structural proteins, or accessory factors. (B) Overview of dRAP application to SARS-CoV-2 analysis enabling the detection of coexpression associations between transcripts originating from human (red lines) and virus (blue lines). RNAseq reads from SARS-CoV-2 infected samples from human cell lines (A549 and NHBE) and patients (BALF, PBMC, and Lung) were collected from public datasets (Blanco-Melo et. al. 2020 and Xiong et. al. 2020). Traditional RNAseq (dashed green arrows), which does not quantify both human and viral transcripts, allows for only differential expression analysis, while dRAP (black arrows) enables both downstream differential and coexpression analyses between host and virus. A549, NHBE, and BALF samples were selected for downstream analyses as they contained SARS-CoV-2 transcripts. Several co-expression analyses (CE) were performed in linear (CE-Net) and nonlinear (CE-dendro) relationships between the human and SARS-CoV-2 transcriptomes and genes of influence (CE-PageRank) in the gene regulatory network. Each CE view, along with DE, produced a set of results for A549, NHBE, and BALF groups. Genes implicated in two or more CE views were collected and used to determine enriched pathways (denoted “consensus pathways”). A “consensus network” was determined by including genes and pathways found by two or more views.