Researchers from the National Institute of Environmental Health Sciences adapted their extracting patterns and identifying genes methodology for RNA-Seq (EPIG-Seq) count data. The software uses count-based correlation to measure similarity between genes, quasi-Poisson modelling to estimate dispersion in the data and a location parameter to indicate magnitude of differential expression.

EPIG-Seq is different than any other software currently available for pattern analysis of RNA-Seq data in that EPIG-Seq: 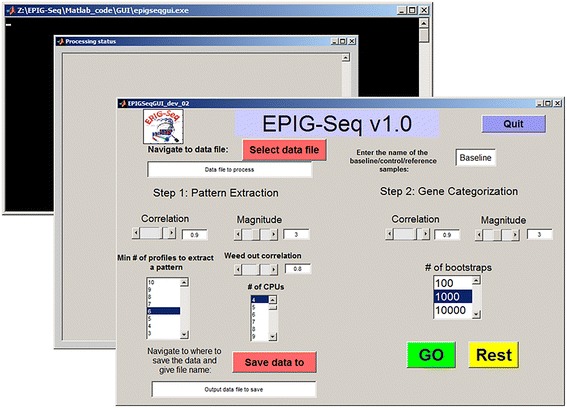 The EPIG-Seq GUI contains a main panel which allows users to define parameters for steps 1 and 2 of the analysis process. A dialog box displays the processing status and a command window displays the dependent processes running in the background

EPIG-Seq provides a table of the genes with bootstrapped p-values and profile plots of the patterns of co-expressed genes. In addition, EPIG-Seq provides a heat map and principal component dimension reduction plot of the clustered genes as visual aids. The developers demonstrate the utility of EPIG-Seq through the analysis of toxicogenomics and cancer data sets to identify biologically relevant co-expressed genes.