Researchers at the FDA have developed methods to evaluate the stability of rat whole blood expression obtained from RNA sequencing (RNA-seq) and assess changes in whole blood transcriptome profiles in experiments replicated over time. Expression was measured in globin-depleted RNA extracted from the whole blood of Sprague-Dawley rats, given either saline (control) or neurotoxic doses of amphetamine (AMPH). The experiment was repeated four times (paired control and AMPH groups) over a 2-year span.

The transcriptome of the control and AMPH-treated groups was evaluated on:

All, except one, of the 70 genes that encode the 80s ribosome had levels that ranked in the top 5% of all mean expression levels. Deviations in sequencing performance led to significant changes in the ribosomal transcripts. The overall expression profile of immune-related genes and genes specific to monocytes, T-cells or B-cells were well represented and consistent within treatment groups. There were no differences between the levels of ribosomal transcripts in time-matched control and AMPH groups but significant differences in the expression of immune-related genes between control and AMPH groups. AMPH significantly increased expression of some genes related to monocytes but down-regulated those specific to T-cells. These changes were partially due to changes in the two types of leukocytes present in blood, which indicate an activation of the innate immune system by AMPH. Thus, the stability of RNA-seq whole blood transcriptome can be verified by assessing ribosomal protein subunits and immune-related gene expression. Such stability enables the pooling of samples from replicate experiments to carry out differential expression analysis with acceptable power. 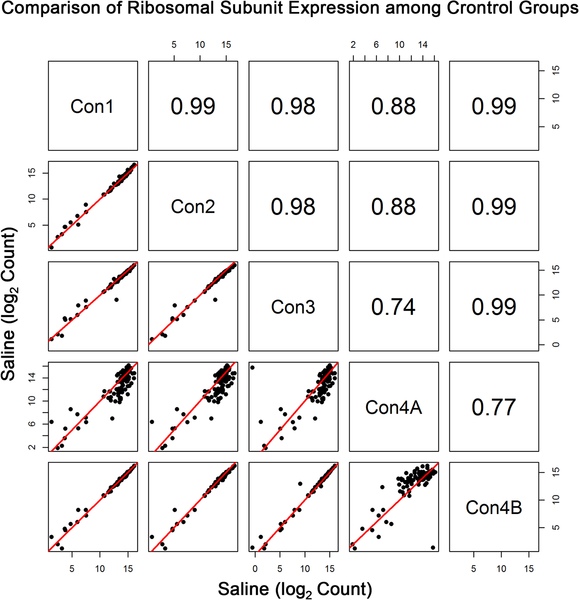 Comparison of the Ribosomal Subunit Expression among Control Groups. Pearson correlation and scatterplot matrix of log2 normalized expression of the ribosomal subunit proteins in control groups, Con1-Con4B. The red solid line is the identity line. Note that the aberrant/anomalous results of Con4A are due to less than optimal amplification prior to sequencing.