Expanded RNA molecules can gum up our brain cells

in Commentary, Publications 23 days ago 359 Views 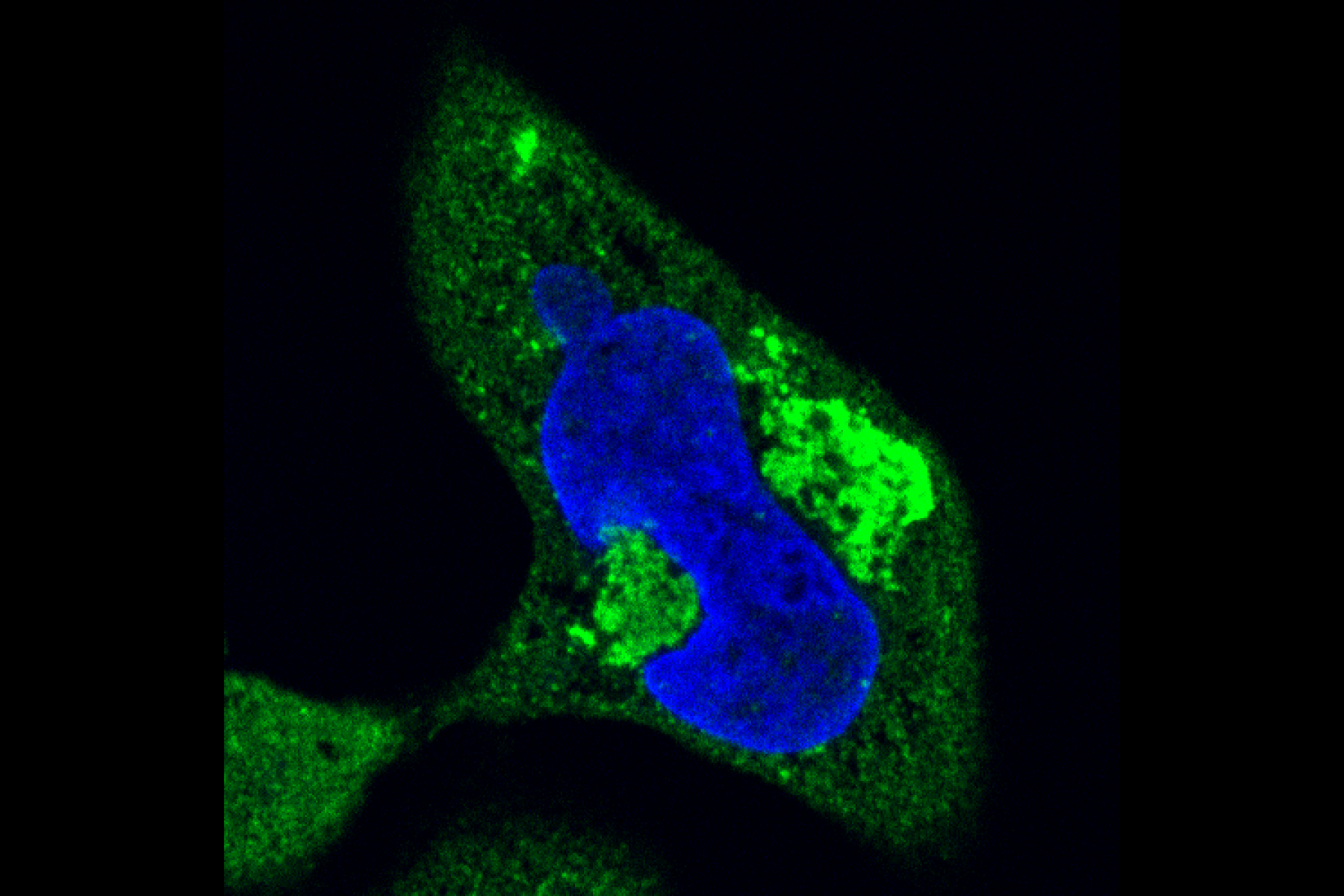 Our DNA contains four types of molecules, adenine, cytosine, thymine, and guanine—called nucleotides or bases—running along the strands that make up our chromosomes. Since there are only four, it is not unusual to find a short sequence of DNA repeating itself somewhere in the genome. However, when a sequence is repeated too many times in a row—dozens or hundreds of times—it can cause problems for cells. Repeat expansion disorders are a category of neurological disorders driven by these excessive repeats, and they can cause neurodegeneration, muscular dystrophy, intellectual disability, and more.

In repeat expansion disorders, the DNA containing excessive repeats may in turn produce RNA containing excessive repeats. Some of the bases in RNA can stick to each other, and the long strands of repeat-containing RNAs are very prone to tangling together, the same way that a long piece of tape is much more likely to fold and stick to itself than a short one. As the repeat-containing RNAs tangle together, they form clumps in the nucleus where RNA is made. These nuclear clumps do not appear to do much harm to cells. However, some of the abnormal RNA travels outside the nucleus to the main body of the cell, or cytoplasm, where it may get made into abnormal protein. Whitehead Institute Member Ankur Jain and graduate student in his lab Michael Das have found that, in cells grown in the lab, repeat-containing RNAs and the proteins made from them combine to form solid, gel-like clumps in the cytoplasm—and these clumps cause serious damage to cell. In work published in the journal The Proceedings of the National Academy of Sciences (PNAS) on January 9th, the researchers show that the clumps can push on and deform the nucleus, affect how molecules travel in and out of the nucleus, trap other molecules so they cannot do their jobs, and ultimately kill the cell.

“We see a stark difference in toxicity between cells where that RNA is retained in the nucleus—where we see almost no toxicity—versus the cells where the RNA is exported into the cytoplasm, undergoes translation into proteins, and forms these clumps,” Das says.

One type of molecule trapped by the cytoplasmic clumps is RNA binding proteins, which are involved in gene expression. These proteins are known to be mislocalized—or found in the wrong place—in repeat expansion disorders, but the mechanism for how this happens has not been entirely clear. Jain and Das think that the cytoplasmic RNA clumps may provide an answer: the RNA binding proteins get stuck inside them.

The fact that researchers had not observed these RNA-based clumps outside of the nucleus before may be due to a fluke with how cells are prepared for observation in the lab. Cells are typically treated with formaldehyde, and this makes the cytoplasmic clumps undetectable by common probes. Now that Jain’s team has figured out how to detect these clumps, they can begin to understand their role in neurological disorders. The next step will be to confirm whether the clumps form and cause the same problems in cells taken from patients; if they do, then this work may help to explain how repeat expansion disorders cause their symptoms.

The researchers’ observations also provide a possible new direction for developing therapies. They have found that the repeat-containing RNA only appears to cause serious damage to cells after it reaches the cytoplasm, where the RNA interacts with cellular machinery that reads RNA and uses its code to create proteins. Typically, this machinery finds a marker on RNA called a start codon and begins translating the RNA into protein from there, which ensures that exactly the right sequence is used to build the correct protein. However, repeat-containing RNA confuses the machinery so that it translates the RNA into protein haphazardly, from various starting points. This process, called RAN translation, leads to the creation of unneeded proteins that are themselves prone to clumping together. The RNA only appeared to form clumps in the cytoplasm in combination with these proteins.

When the researchers prevented the repeat-containing RNA from leaving the nucleus, or from being translated into protein, it also prevented the clumps from forming and averted damage to the cells. Jain’s lab is interested in finding a drug that can achieve the same effect, and testing whether it could help to treat repeat expansion disorders.

The researchers also want to test whether this mechanism is at play across repeat expansion disorders. Das looked specifically at RNA containing repeats of the sequence “CAG,” which is the repeat found in Huntington’s disease, a neurodegenerative disorder, but there are many other repeat sequences that cause diseases.

“We took a bottom-up approach by seeing if we could recreate the defects found in disease in cells in the lab,” says Jain, who is also a professor of biology at the Massachusetts Institute of Technology. “That has led to many new insights, and now we can go back and see how these mechanisms work in patient tissue.”