Gene expression measurements are typically performed on a fixed-weight aliquot of RNA, which assumes that the total number of transcripts per cell stays nearly constant across all conditions. In cases where this assumption does not hold (e.g., when comparing cell types with different cell sizes) the expression data provide a distorted view of cellular events. Assuming constant numbers of total transcripts, increases in expression of some RNAs must be compensated for by decreases in expression of others.

Therefore, University of Regensburg researchers propose calibrating gene expression data to an external reference point, the number of cells in the sample, using whole-cell spike-ins. In a systematic dilution experiment, they mixed varying numbers of human cells with fixed numbers of Drosophila melanogaster cells and scaled the expression levels of the human genes relative to those of the Drosophila genes. This approach restored the original gene expression ratios generated by the dilutions. They then used Drosophila whole-cell spike-ins to uncover non-symmetric gene expression changes, in this case much larger numbers of induced than repressed genes, under perturbations of the human cell line P493-6. Drosophila whole-cell spike-ins are an experimentally and computationally easy and low-priced method to derive mRNA fold changes of absolute abundances from RNA sequencing (RNA-Seq) and quantitative real-time PCR (qPCR) data. 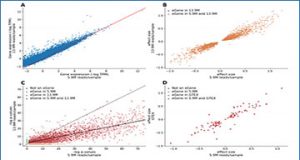