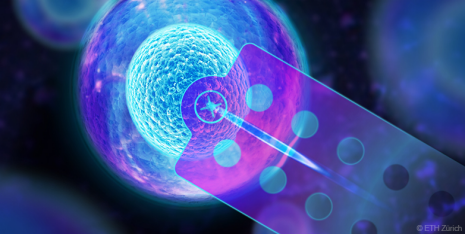 Biologists are increasingly interested in the behaviour of individual cells, rather than the one of an entire cell population. A new method developed at ETH could revolutionise single cell analysis. The technology uses the world’s smallest syringe to sample the content of individual cells for molecular analyses.

ETH researchers have developed a method using a nanosyringe whose tiny needle is able to penetrate single living cells and extract their content. The technology can be used for cell cultures, for example, in order to investigate the interior of the cells. This allows scientists to identify the differences between individual cells at the molecular level, as well as to identify and analyse rare cell types. “Our method opens up new frontiers in biological research. It is the start of a whole new chapter, so to speak”, says Professor Julia Vorholt from the Department of Biology.

The new method has numerous advantages: researchers can sample individual cells of a tissue culture directly in the petri dish. “This means we can study how a cell affects its neighbouring cells”, says Orane Guillaume-Gentil, a postdoc in Professor Vorholt’s research group. This type of investigation is not possible using conventional methods, as molecular analyses generally require the cells to first be physically separated and then destroyed.