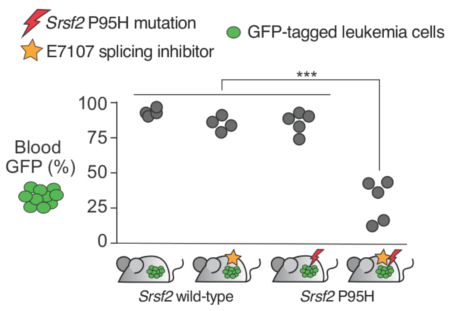 About five years ago, it was shown that mutations in genes encoding splicing factors occur frequently in patients with myelodysplastic syndromes (MDS) and acute myeloid leukemia (AML). Splicing, the process by which introns are removed from the pre-messenger RNA and exons are assembled into mature mRNA, is carried out by a large protein complex called the spliceosome. The spliceosomal gene mutations found in MDS are often mutually exclusive with one another and tend to occur in a heterozygous state for reasons that are not well understood. A previous study by Robert Bradley’s Laboratory (Public Health Sciences and Basic Sciences Divisions), in collaboration with Dr. Omar Abdel-Wahab’s Laboratory (Memorial Sloan Kettering Cancer Center) studied the biological and transcriptional consequences of mutations in SRSF2 (Serine-Arginine Splicing Factor 2), whose gene product functions in splice site recognition. This initial study found that mice harboring an Srsf2P95H alteration exhibited supernumerary hematopoietic stem and progenitor cells (HSPC) as well as impaired differentiation. A new Fred Hutch study led by post-doctoral fellow Dr. Heidi Dvinge in the Bradley Lab, again with their collaborators at Memorial Sloan Kettering, and published in Nature Medicine, tested the hypothesis that SRSF2P95H mutations always occur in a heterozygous state because the mutant protein relies on its normal counterpart to support both normal and malignant hematopoiesis.

First, the authors generated mice expressing the mutant Srsf2P95H protein in hematopoietic cells in an inducible and hemizygous manner (wherein one copy of Srsf2 is deleted and the other harbors the P95H alteration; Srsf2P95H/-). Mice transplanted with Srsf2P95H/-, but not Srsf2P95H/+, bone marrow mononuclear cells displayed severe bone marrow aplasia and were short-lived. RNA-sequencing analysis showed that these animals lost expression of HSPC self-renewal genes, and exhibited increased mis-splicing events due to altered recognition of exonic splicing enhancer motifs (ESE), consistent with their previous study. In a mouse model of leukemia driven by overexpression of the MLL-AF9 oncogene, penetrant AML with comparable latencies were observed both in Srsf2+/+ and Srsf2P95H/+ genotypes. However, pharmacological inhibition of splicing catalysis with the small molecule E7107 provided a survival benefit and decreased disease burden only in the Srsf2P95H/+ context. RNA-seq analysis of leukemic myeloid cells purified from E7107-treated animals revealed that the histone methyltransferase Dot1l and the homeobox transcription factor Meis1, which are known to be involved in leukemogenesis, displayed heightened exon skipping and intron retention in the Srsf2P95H/+ background.

Finally, the investigators asked whether their findings could be extended to human AML. To this end, they first reexamined RNA-seq data from SRSF2-mutated, AMLs that harbored a MLL rearrangement and found global changes in splicing and ESE preferences similar to those observed in their mouse model of MDS. Second, the researchers established patient-derived xenografts from primary AML with or without spliceosomal gene mutations. Strikingly, the SRSF2-mutated leukemias, but not their wild-type counterparts, exhibited a robust reduction in disease burden following E7107 treatment. Said Dr. Dvinge ” Our work demonstrates that splicing inhibitors, such as E7107, are synthetically lethal in combination with genetic lesions affecting components of the splicing machinery. ”

In summary, a combination of genetic and pharmacological studies revealed that while SRSF2 mutations are highly prevalent in MDS and AML, the Srsf2-mutated protein requires the normal allele to generate a transcriptome that can support both normal and oncogenic hematopoiesis and that ” Drugs that modulate splicing may present a therapeutic opportunity in a genetically defined subset of patients, carrying mutations in spliceosomal genes”, said Dr. Dvinge. 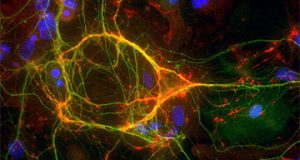