The molecular characteristics of human diseases are often represented by a list of genes termed “signature genes”. A significant challenge facing this approach is that of reproducibility: signatures developed on a set of patients may fail to perform well on different sets of patients. As diseases are resulted from perturbed cellular functions, irrespective of the particular genes that contribute to the function, it may be more appropriate to characterize diseases based on these perturbed cellular functions.

Researchers at Boston University proposed a profile-based approach to characterize a disease using a binary vector whose elements indicate whether a given function is perturbed based on the enrichment analysis of expression data between normal and tumor tissues. Using breast cancer and its four primary clinically relevant subtypes as examples, this approach is evaluated based on the reproducibility, accuracy and resolution of the resulting pathway profiles.

Pathway profiles for breast cancer and its subtypes are constructed based on data obtained from microarray and RNA-Seq data sets provided by The Cancer Genome Atlas (TCGA), and an additional microarray data set provided by The European Genome-phenome Archive (EGA). An average reproducibility of 68% is achieved between different data sets (TCGA microarray vs. EGA microarray data) and 67% average reproducibility is achieved between different technologies (TCGA microarray vs. TCGA RNA-Seq data). Among the enriched pathways, 74% of them are known to be associated with breast cancer or other cancers. About 40% of the identified pathways are enriched in all four subtypes, with 4, 2, 4, and 7 pathways enriched only in luminal A, luminal B, triple-negative, and HER2+ subtypes, respectively. Comparison of profiles between subtypes, as well as other diseases, shows that luminal A and luminal B subtypes are more similar to the HER2+ subtype than to the triple-negative subtype, and subtypes of breast cancer are more likely to be closer to each other than to other diseases. 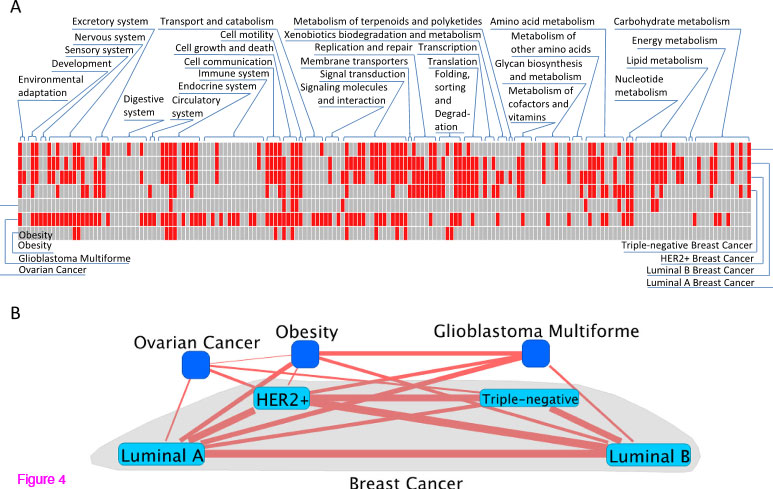