RNA-sequencing (RNA-Seq) has become a preferred option to quantify gene expression, because it is more accurate and reliable than microarrays. In RNA-Seq experiments, the expression level of a gene is measured by the count of short reads that are mapped to the gene region. Although some normal-based statistical methods may also be applied to log-transformed read counts, they are not ideal for directly modeling RNA-Seq data. Two discrete distributions, Poisson distribution and negative binomial distribution, have been commonly used in the literature to model RNA-Seq data, where the latter is a natural extension of the former with allowance of overdispersion. Due to the technical difficulty in modeling correlated counts, most existing classifiers based on discrete distributions assume that genes are independent of each other. However, as University of Arkansas researchers show in this paper, the independence assumption may cause non-ignorable bias in estimating the discriminant score, making the classification inaccurate. To this end, they drop the independence assumption and explicitly model the dependence between genes using Gaussian copula. They apply a Bayesian approach to estimate covariance matrix and the overdispersion parameter in negative binomial distribution. Both synthetic data and real data are used to demonstrate the advantages of their model. 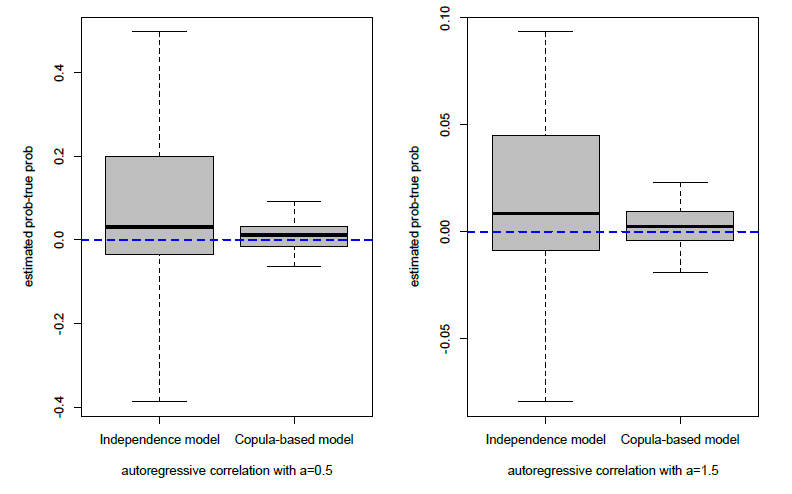 Comparison between Dong et al.’s independence model and the copula-based model. The y-axis represents the estimation bias in the discriminant score, i.e., the estimated score minus the true score.