A first of its kind study shows that who we inherit genetic variants from – our mother or father – is crucial for the development of diseases and for research studies aimed at finding causes and potential treatments.

CHAPEL HILL, NC – You might resemble or act more like your mother, but a novel research study from UNC School of Medicine researchers reveals that mammals are genetically more like their dads. Specifically, the research shows that although we inherit equal amounts of genetic mutations from our parents – the mutations that make us who we are instead of some other person – we actually “use” more of the DNA that we inherit from our dads.

The research, published in the journal Nature Genetics, has wide implications for the study of human disease, especially when using mammalian research models. For instance, in many mouse models created for the study of gene expression related to disease, researchers typically don’t take into account whether specific genetic expression originates from mothers or fathers. But the UNC research shows that inheriting a mutation has different consequences in mammals, depending on whether the genetic variant is inherited from the mother or father.

“This is an exceptional new research finding that opens the door to an entirely new area of exploration in human genetics,” said Fernando Pardo-Manuel de Villena, PhD, professor of genetics and senior author of the paper. “We’ve known that there are 95 genes that are subject to this parent-of-origin effect. They’re called imprinted genes, and they can play roles in diseases, depending on whether the genetic mutation came from the father or the mother. Now we’ve found that in addition to them, there are thousands of other genes that have a novel parent-of-origin effect.”

These genetic mutations that are handed down from parents show up in many common but complex diseases that involve many genes, such as type-2 diabetes, heart disease, schizophrenia, obesity, and cancers. Studying them in genetically diverse mouse models that take parent-of-origin into account will give scientists more precise insights into the underlying causes of disease and the creation of therapeutics or other interventions.

The key to this research is the Collaborative Cross – the most genetically diverse mouse population in the world, which is generated, housed, and distributed from UNC. Traditional lab mice are much more limited in their genetic diversity, and so they have limited use in studies that try to home in on important aspects of diseases in humans. The Collaborative Cross bred together various wild type mice to create wide diversity in the mouse genome. Pardo-Manuel de Villena said that this diversity is comparable to the variation found in the human genome. This helps scientists study diseases that involve various levels of genetic expression across many different genes.

Gene expression connects DNA to proteins, which then carry out various functions inside cells. This process is crucial for proper human health. Mutations that alter gene expression are called regulatory mutations.

“This type of genetic variation is probably the most important contributor – not to simple Mendelian diseases where there’s just one gene mutation [such as cystic fibrosis] – but to much more common and complex diseases, such as diabetes, heart disease, neurological conditions, and a host of others,” Pardo-Manuel de Villena said. “These diseases are driven by gene expression, not of one gene but of hundreds or thousands of genes.

For the Nature Genetics study, Pardo-Manuel de Villena’s team, including first author James Crowley, PhD, assistant professor of genetics, selected three genetically diverse inbred strains of mice that were descended from a subspecies that evolved on different continents. These mice were bred to create nine different types of hybrid offspring in which each strain was used as both father and mother. When the mice reached adulthood, the researchers measured gene expression in four different kinds of tissue, including RNA sequencing in the brain. They then quantified how much gene expression was derived from the mother and the father for every single gene in the genome. 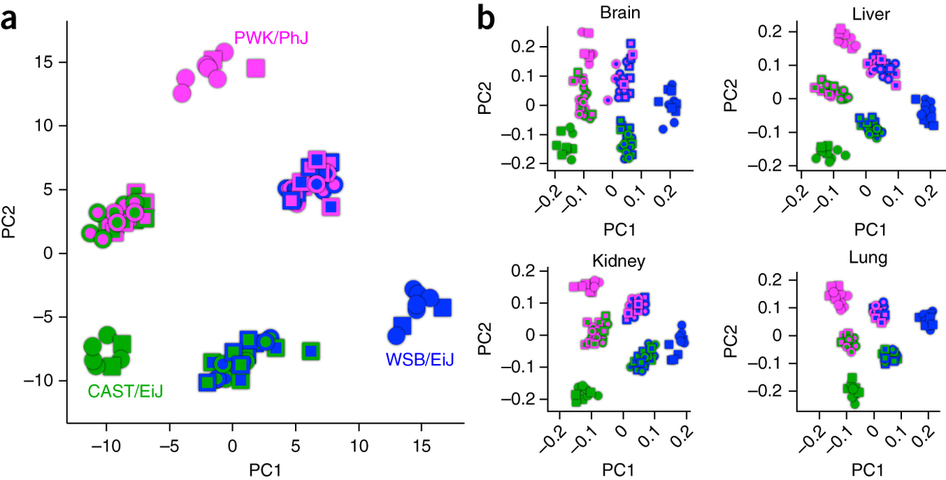 “We found that the vast majority of genes – about 80 percent – possessed variants that altered gene expression,” Crowley said. “And this was when we discovered a new, genome-wide expression imbalance in favor of the dad in several hundred genes. This imbalance resulted in offspring whose brain gene expression was significantly more like their father’s.”

For every gene a scientist is interested in, Pardo-Manuel de Villena’s team can create mice that have low, intermediate, or high expression of genes. And they can explore if that expression is associated with a specific disease.

These types of genetic mutations across hundreds of genes are hard to study and a major bottleneck to realizing the promises of the post-genome era. But Pardo-Manuel de Villena said, “Thanks to the Collaborative Cross, the mouse can be used to model how these genes work and how they impact health and disease in any kind of tissue in the body.”

The National Human Genome Research Institute and the National Institute of Mental Health funded the creation of the UNC Center for Integrated Systems Genetics (CISGen), which contributed to the development and funding of proof of principle experiments for the Collaborative Cross to find genetic and environmental factors important in psychiatry.

Other co-first authors of the Nature Genetics paper are Vasyl Zhabotynsky, a graduate research assistant in the department of genetics and biostatistics; Wei Sun, PhD, associate professor of genetics and biostatistics in the UNC School of Medicine and the UNC Gillings School of Global Public Health, and member of the Carolina Center for Genomic Sciences. Additional key co-authors include a team of graduate students directed by Leonard McMillan, PhD, associate professor of computer science in the UNC College of Arts and Sciences.