Researchers at the Vienna BioCenter designed a testing protocol for SARS-CoV-2 that can process tens of thousands of samples in less than 48 hours. The method, called SARSeq, is published in the journal Nature Communications and could be adapted to many more pathogens.

The COVID-19 pandemic has lasted more than a year and continues to impact our lives tremendously. Although some countries have launched speedy vaccination campaigns, many still await large-scale immunization schemes and effective antiviral therapies – before that happens, the world urgently needs to regain a semblance of normalcy.

One way to bring us closer to that point is massive parallel testing. Molecular tests that detect the presence of SARS-CoV-2 have become the best way to isolate positive cases and contain the spread of the virus. Several methods have come forward, some that detect viral proteins from nasopharyngeal swabs (such as antigen tests), and some that detect the presence of viral RNA from swabs, gargle samples, or saliva samples (such as reverse transcription and polymerase chain reaction tests, or RT-PCR).

Although antigen tests facilitate some logistical aspects of mass testing, their detection power is relatively weak – infected individuals carrying low amounts of virus remain undetected and can continue to infect other people. PCR tests, on the other hand, are more sensitive because they multiply fragments of the viral genome before scanning samples for the virus. However, they rely on the detection of fluorescent labels that tag viral sequences, which means that pooling samples coming from different people makes the process rather inefficient: if a pool tests positive, all the samples within the pool must be tested again individually to identify the source of the fluorescent signal. Too many machines needed, too expensive, too slow.

During the very first lockdown, scientists at the Vienna BioCenter were mulling over the situation: there had to be a way to scale up testing. Ulrich Elling, group leader at the Institute of Molecular Biotechnology of the Austrian Academy of Sciences (IMBA), and Luisa Cochella, group leader at the Research Institute of Molecular Pathology (IMP), decided to channel their frustration into an innovative solution. IMP group leader Alexander Stark and IMBA postdoc Ramesh Yelangandula joined their efforts, and the project took off.

Combining their expertise in genomics, RNA biochemistry and data analysis, they developed a method that could enable large groups to be tested for SARS-CoV-2 with the same sensitivity as regular PCR tests. SARSeq, or ‘Saliva Analysis by RNA sequencing’, achieves high sensitivity, specificity, and the power to process up to 36,000 samples in less than 48 hours. The method is now published in the journal Nature Communications.

The testing principle is conceptually simple: individual patient samples are collected into the wells of a testing plate – one well for each sample. Then, a fragment of viral RNA unique to SARS-CoV-2 – the nucleocapsid gene – is selectively converted to DNA and PCR-amplified in any well that contains it.

“Amplifying the viral material from individual samples to a maximum homogenizes its quantity across positive samples, making SARSeq highly sensitive,” explains Luisa Cochella. “Within the thousands of samples that we could test simultaneously, some may contain up to 10 million times more coronavirus particles than others – if we pooled such samples before amplification, those with high amounts of viral material could mask other positive cases.”

What distinguishes this first step to the usual PCR test is that each sample receives a unique set of short DNA sequences – or barcodes – that attach to the amplifying viral DNA. In a second amplification step, all the samples from one plate are pooled into one well, which receives a second set of unique DNA barcodes. The contents of multiple plates can be pooled once more, as the DNA molecules from each sample carry a unique combination of two sets of barcodes. This pooling and barcoding strategy makes SARSeq highly specific and scalable. 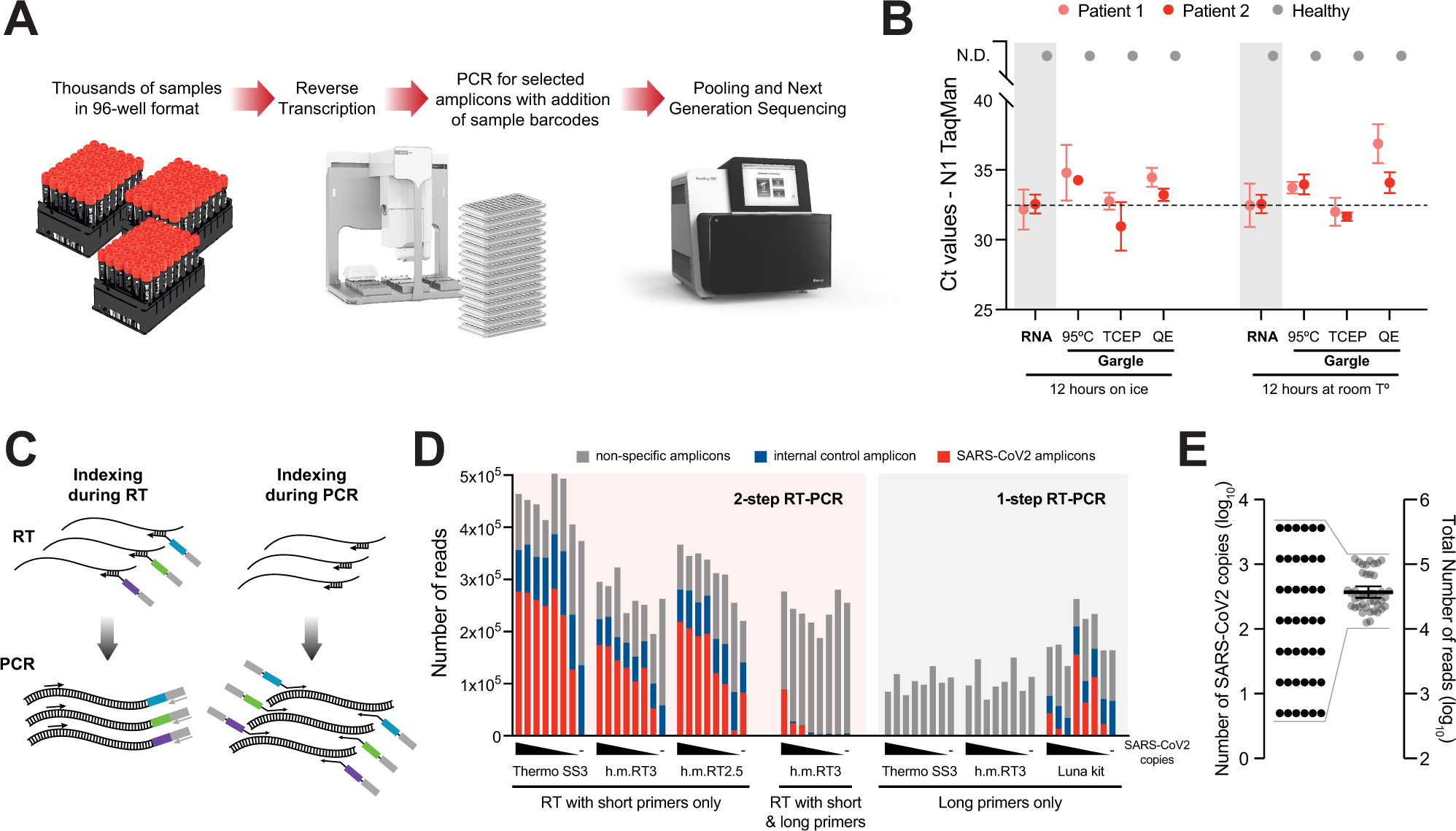 A Overview scheme to illustrate the envisioned analysis pipeline. B Comparative analysis of SARS-CoV-2 detection by TaqMan RT-qPCR on the N1 amplicon, following different sample preparation treatments. C Illustration of amplicon indexing either during RT or PCR. Colored boxes symbolize different indices that label individual samples for identification by sequencing (by NGS). Arrows illustrate oligonucleotide hybridization to RNA during RT or DNA in PCR. D Comparison of amplicon levels measured by NGS after indexing either during RT or PCR. E Total NGS read numbers per individual sample, for a set of 42 samples containing from 5 to 3645 SARS-CoV-2 RNA molecules; note the range compression from four to one order of magnitude, which enables equal representation of all samples across the sequencing space and therefore high sensitivity and scalability.

“We combine the sensitivity of PCR with the high throughput of Next Generation Sequencing technology, or NGS, the same used to sequence the human genome. The NGS machine processes the pooled samples and tells us which samples contained any SARS-CoV-2 material.  The barcodes allow us to distinguish each positive sample from the others, and trace it back to a patient,” says Ramesh Yelagandula, first author of the study. Moreover, the NGS-based method allows to test several RNAs in parallel, including RNAs that control the sample quality or RNAs from other pathogens for differential diagnostics.

“The Next Generation Sequencing facility and other colleagues at the Vienna BioCenter were of tremendous help to develop and optimize the method,” says Alexander Stark. “With our machines, home-made enzymes, and analysis pipeline, we expect each test to cost less than five Euro.”

The testing procedure can run in parallel to existing diagnostics, while being independent of the bottlenecks in supply chains. Therefore, it does not compete with other testing methods for reagents or equipment.

“We developed SARSeq to try and circumvent the limitations of other tests, and to process thousands of samples in parallel. Not only is it an excellent method to detect SARS-CoV-2, but it can also be applied to other respiratory pathogens like the flu virus, the common cold rhinoviruses, and potentially many others,” says Ulrich Elling.

The principles behind SARSeq are simple and adaptable to any respiratory pathogen. As the world’s population skyrockets along with our proximity to animals, cutting-edge diagnostic methods like SARSeq will be crucial to prevent future diseases from spreading like wildfire.