from the Harvard Gazette by Peter Reuell, Harvard Staff Writer

Two groups of Harvard scientists will be among the first researchers nationwide to receive grant funding through the BRAIN (Brain Research through Advancing Innovative Neurotechnologies) Initiative launched last year by President Obama.

“The human brain is the most complicated biological structure in the known universe. We’ve only just scratched the surface in understanding how it works — or, unfortunately, doesn’t quite work when disorders and disease occur,” said NIH Director Francis S. Collins. “There’s a big gap between what we want to do in brain research and the technologies available to make exploration possible. These initial awards are part of a 12-year scientific plan focused on developing the tools and technologies needed to make the next leap in understanding the brain. This is just the beginning of an ambitious journey and we’re excited about the possibilities.”

Announced by Obama in April 2013, the initiative is intended to support researchers in developing a new understanding of the brain and how individual cells and complex neural circuits interact. The hope is that the research will fill major gaps in science’s understanding of how the brain works and provide new ways to treat, or even prevent, a host of brain disorders.

“What we’re trying to work on is cell-type classification,” Sanes explained. “The idea is that if you want to understand the brain, you first need what is essentially a parts list — you need to know what type of neurons are there, so you can figure out what they do and find ways to manipulate them. There is also a growing feeling that a number of neurological diseases are diseases of specific subtypes of neurons.”

That sort of foundational data, Sanes said, will also be critical to any future studies aimed at understanding how the brain records and stores information like memories or learns new skills. 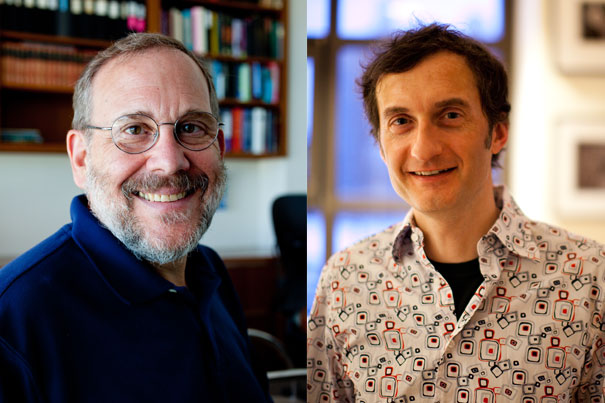 Harvard’s Joshua Sanes (left) and Alexander Schier, as well as Aviv Regev of the Broad Institute (not pictured), are among the first researchers nationwide to receive grant funding through the BRAIN Initiative launched last year by President Obama. A second team of recipients includes Haim Sompolinsky, Jeff Lichtman, Connie Cepko, and Florian Engert.

To identify the various cell types, Sanes and colleagues proposed using a new method, called single-cell RNA seq, to sequence the RNA of tens of thousands of individual cells and use subtle differences in their genetic makeup to differentiate between them.

“We want to develop this method to the point where we could take a brain region and separate it into all its individual neurons, sequence those neurons one at a time on a massive scale, and use a computer to identify the various cell types,” Sanes said.

Engert and colleagues, meanwhile, hope to target specific neural circuits in an effort to understand not only how patterns of neural activation give rise to particular thoughts and behaviors, but how abnormalities in those circuits can lead to neurodevelopmental and psychiatric disorders.

As outlined in the grant proposal, the project would combine whole-brain imaging of the neural activity of larval zebrafish with detailed studies of the fish’s anatomy and neural connections. Taken together, he said, the data would enable researchers to construct a “virtual fish,” which could be analyzed to understand how specific brain circuits respond to particular stimuli.

“The final goal is to generate quantitative models of brain-wide neural circuits that explain the dynamic processing of sensory information as well as the generation of motor output by these circuits,” Engert wrote. “We will start with quantitative models of simple reflex behaviors, like the optomotor and optokinetic reflex, where the transformation of sensory input to motor output is relatively straightforward and well-defined. These elementary models will serve as a scaffold that can be refined and complemented by additional data from structure function studies from fish performing in more sophisticated behavioral assays that involve more complex stimuli.”

While both studies will stretch over several years, Sanes said the efforts to understand how the brain functions are exceptional for a host of reasons.

“Neurobiology is truly in a golden age right now,” he said. “In the last 10 years, the expanding technological capabilities make your jaw drop. To have the president signal his interest, not only in neurobiology, but in basic research, is incredibly inspiring.”