Single-cell RNA sequencing (scRNA-seq) has revolutionized the ability to characterize cell types and their gene expression programs in organisms and tissues. Although great improvements in cellular throughput have been made, methods generally suffer from low sensitivity and quantification that is limited to short RNA pieces. Now, researchers at Karolinska Institutet have released Smart-seq3 that greatly improves the quality in scRNA-seq. The study is published in Nature Biotechnology.

The understanding of the basic types of cells that makes up the complex tissues and organs of our bodies has dramatically improved with single-cell methods. Cells are grouped according to their gene expression profiles which have revealed the cell types within the samples analyzed. The more cells analyzed and the higher the quality of the individual cells, the greater are the chances to identify rare cell types, sub-types or even more transient cellular states.

Smart-seq is one of the most popular methods for generating single-cell RNA sequencing data. It has been used extensively because of its high sensitivity and ability to cover the full-length of RNA transcripts. Scientists at Karolinska Institutet have now released Smart-seq3, a highly improved iteration of this popular Smart-seq single cell method, with dramatically increased sensitivity (meaning they sequence a larger fraction of all the RNAs present in the cells before lysis). Importantly, Smart-seq3 also features a new approach of 5’-end molecule counting while retaining the full transcript coverage, which uniquely enable the computational reconstruction of RNA sequence that was counted. Having the complete RNA sequence of the transcripts reveals how the RNA was processed (e.g. via alternative splicing of coding parts) and whether the RNA was generated from the mother’s or father’s gene copy (allele). 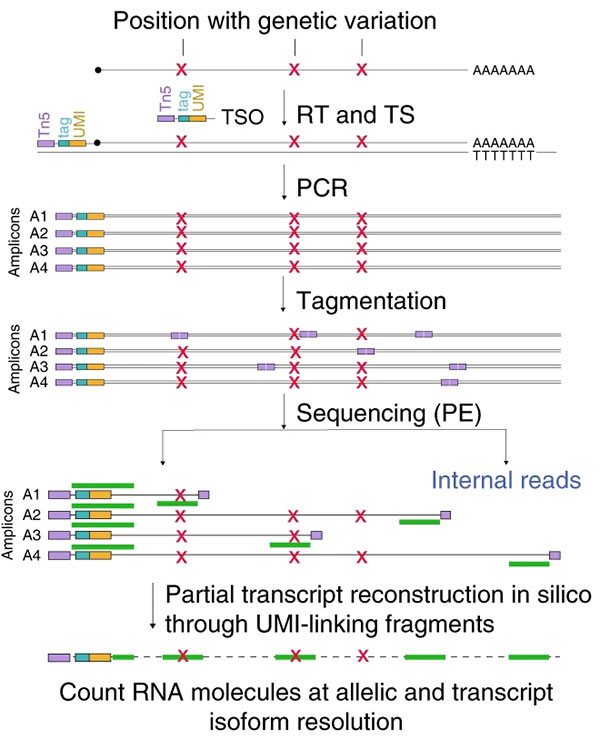 ”To be able to count and reconstruct RNAs will be very important for studies on transcriptional dynamics and gene regulation” says Rickard Sandberg, professor at the Department of Cell and Molecular Biology, Karolinska Institutet. “Because of the high sensitivity and lowered costs of Smart-seq3, it should have broad use for future large-scale characterization of cell types and states across tissues and organisms.”

As part of the study, the researchers benchmark and validate their new method extensively compared to existing and alternative approaches. To find the improved sensitivity, the researchers had to experimentally evaluate over a thousand different reaction conditions that took several years to finish.

”It was a lot of hard work to established this new method and improve on the already good sensitivity of Smart-seq2, but seeing that Smart-seq3 uniquely captured types of immune cells that were missed with other methods was very rewarding!” says Michael Hagemann-Jensen, a postdoctoral researcher and first author on the study.

“The new design of Smart-seq3 made it possible to reconstruct the counted RNA molecules, however completely new computational approaches were necessary to process and reconstruct molecules”, says Christoph Ziegenhain, a postdoctoral researcher and second author on the study.

Importantly, the improved protocol has been openly shared on the website protocols.io and developed computational software was shared on github.com, to enable its wide use in biomedical research.