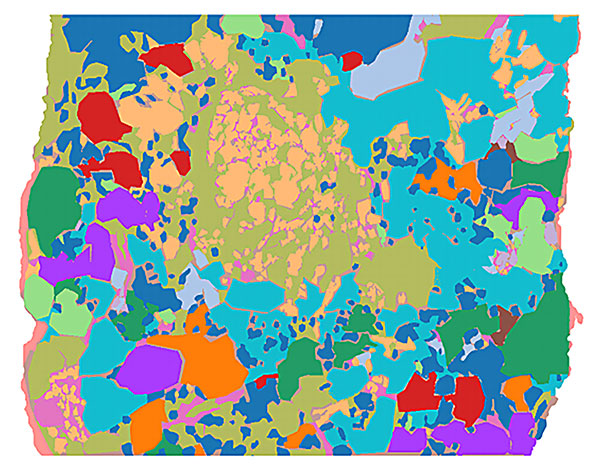 Researchers at KTH and in the U.S. have devised a new method for studying individual cells in human tissue, which could lead to even earlier detection of diseases such as cancer and ALS. The method offers a 1,400-fold increase in spatial resolution.

Published in the scientific journal, Nature Methods, the study was performed by researchers from KTH Royal Institute of Technology and the Broad Institute of MIT and Harvard.

The technology builds on transcriptomics, or the mapping of the cell’s molecular fingerprints. RNA-sequencing provides a tool for studying different functions within tissues but the molecular profile only reveals so much. The cell’s position in the tissue also has several stories to tell, including how different diseases occur.

Methods for studying active genes in individual cells from tissue have evolved dramatically. At the forefront of this research are various microfluidic systems where researchers have been able to isolate individual cells and then carry out so-called massive parallel RNA-sequencing. This method has enabled the profiling of hundreds of thousands of cells from tissue, but provides no information about the cell’s origin in the tissue.

At the same time, other spatial and molecular methods that capture detailed information about the position of cells in frozen or solid tissue have been developed.

Yet such methods still demand knowledge of which genes – or biomarkers – researchers want to investigate, which in turn requires relatively large and expensive instruments. In addition, it is usually only possible to study hundreds of genes at one time, out of thousands of active ones.

“To solve this, a couple of years ago we developed what is called Spatial Transcriptomics, which gives a spatial image of all genes, the entire transcriptome, in a tissue,” says Joakim Lundeberg, professor of genetic engineering at KTH. This in turn has led to the possibility of developing artificial intelligence for analysis of the constituents of a sample.

“The limitation up to now has been that the researchers were only able to study a group of cells and not the individual cell,” Lundeberg says.

The new research effort addressed that challenge, says co-author Sanja Vickovic, a Wallenberg Fellow at the Broad Institute and a KTH PhD graduate.

“In the new study we show that we can study parts of a cell, that is, we have increased the resolution 1,400 times, which allows us to more accurately describe individual cells in a tissue,” Vickovic says. “We show this both with samples from brain tissue and breast cancer.”

The researchers call the new method “High Definition Spatial Transcriptomics” (HDST), and it opens up entirely new opportunities to create a better understanding of the cell in its natural environment. This can be important for studies of cancer tumors.

One example is cancer where a gene mutation in a single cell sets off the development of a tumor. Diagnostics in use today are based on observing the tissue in a microscope and looking for tumor cells. The fewer cells there are, the harder they are to find. “This is a process that takes time and is subjective. You can simply miss this important tumor cell,” Vickovic says.

With the HDST method, computers look for cells’ gene activity in the data, since each cell has its own gene activity signature without any subjective interpretation, Lundeberg says.

“Before we would look for a tumor cell gene signature in a group of about 20 cells. Now we have improved the technology so we find a single tumor cell, even parts of a tumor cell,” he says.

HDST could become key in treating patients because it enables labs to spot early changes within a single cell, where many diseases originate. “In later stages of a disease, changes that occur early and are driving the disease are hidden by everything else that is going on,” he says.

The research team underscored that point with a study of ALS which was published last spring. “We could show very early spatial and molecular changes before illness occurred.