Researchers at the University of Eastern Finland have developed and characterized a new cell model for Alzheimer’s disease that has wide utility for research and could prove useful in early diagnosis and testing of new therapies. In collaboration with clinicians at Kuopio University Hospital, the researchers collected nasal biopsies from cognitively healthy individuals and patients diagnosed with Alzheimer’s disease over several years. Following tissue processing, the researchers applied a powerful single cell RNA sequencing approach to characterize the patient-derived cells of the olfactory mucosa, located in the upper parts of the nasal cavity. The olfactory mucosal tissue is critical for the sense of smell via its olfactory receptor neurons projecting to the brain.

“This unique approach has revealed that cells located in the nasal cavity are impaired in patients with Alzheimer’s disease,” says Early-stage Researcher Riikka Lampinen.

“Not only are transcriptional alterations observed, but also the functions of these patient-derived cells are impaired.”

The new cell model and the results were published in Cells today.

Alzheimer’s disease is a devastating, chronic disease for which there is no cure or effective treatment. Therefore, new human-based approaches are needed to understand and combat the disease pathophysiology. The new results from the research group of Associate Professor Katja Kanninen could in the future provide important insight into why a large proportion of Alzheimer’s disease patients suffer from a disturbed sense of smell early in the disease pathogenesis. Furthermore, this new research model that reflects human physiology has wide utility in allowing detailed investigation of disease mechanisms that could lead to new drug discoveries. 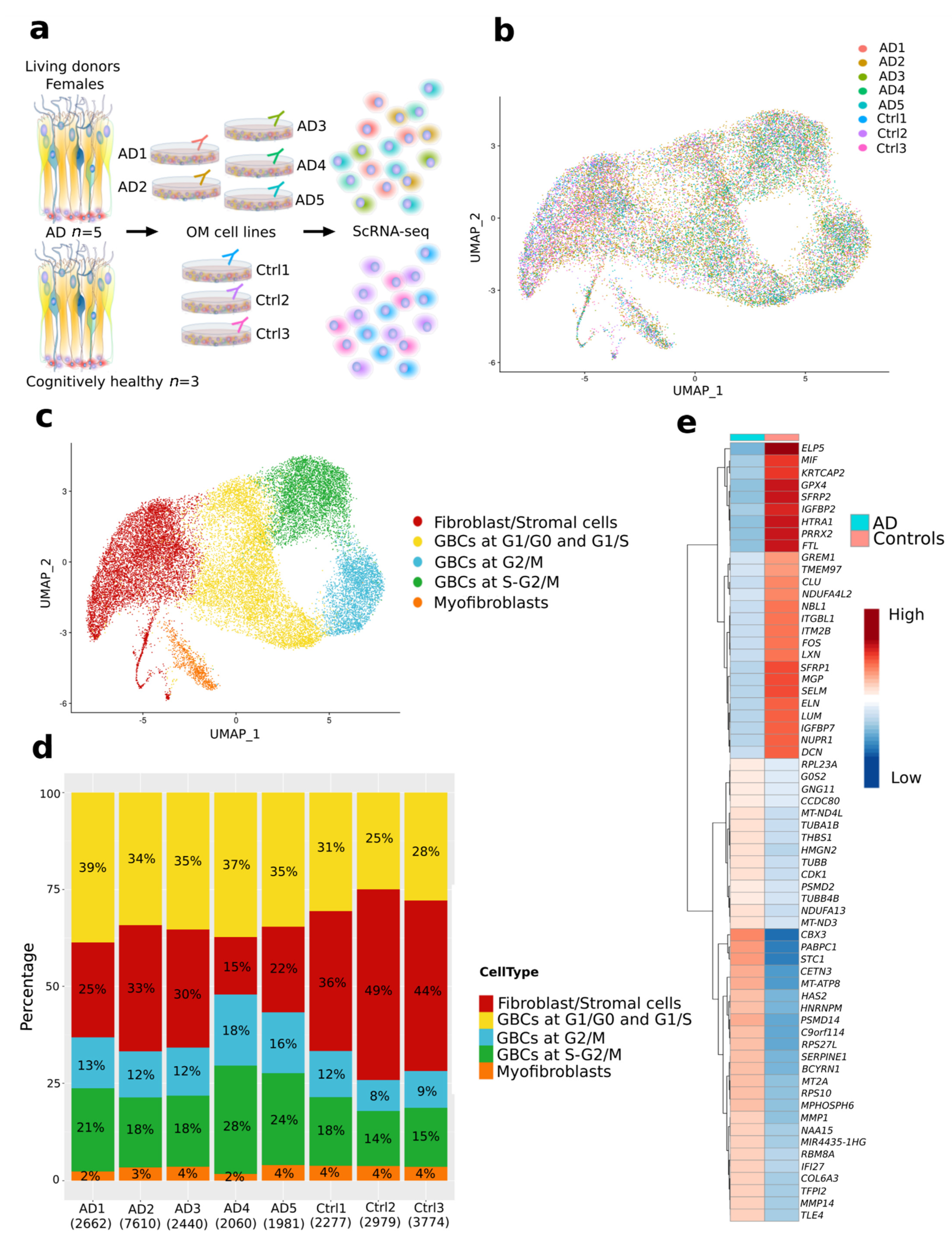 (a) Schematic illustration of the sample material and scRNA-seq workflow. (b) UMAP visualization of the clustering of single cells and showing by colors the cells derived from individual cognitively healthy donors or patients with AD. (c) Annotated cell types in samples derived from cognitively healthy individuals and patients with AD. (d) Proportion (%) of the cells of the total samples derived from each cell type. Under each sample, ID shows the total number of cells for each sample (e) Heatmap depicting a subset of the AD-related genes differentially expressed between AD and control libraries. The data are presented as the average of the log normalized and scaled expressions of the most differentially expressed genes (avg(log2FC) < −0.4, avg(log2FC) > 0.4) in AD and control cells.

The olfactory mucosa has been proposed as an entry point of air pollutants and viruses to the brain.

“Our current work is focused on understanding in detail how viral infections or the exposure to air pollutants affect the cells of the olfactory mucosa,” Katja Kanninen says.

While these results are yet to be published, they are eagerly awaited in hopes of providing important insight into how agents that are inhaled in air could gain access to the brain, and thus disturb its function.