Test developed by OHSU researchers could enable treatment early, when cancer is more likely to be curable

Oregon Health & Science University scientists have devised an accurate and sensitive way to test blood to see if a pre-cancerous condition is escalating to outright cancer — potentially enabling treatment early in tumor development when cancer is more likely to be curable.

The OHSU researchers focused on two common conditions that can precede highly lethal cancers: liver cirrhosis, which boosts the risk of liver cancer, and a precursor to the blood cancer multiple myeloma called MGUS, which stands for “monoclonal gammopathy of undetermined significance.”

If the findings hold up in larger clinical studies, they set the stage for a simple, affordable method to screen people at risk by taking a small blood sample a few times a year.

“Our biomarker may recapitulate the transition to cancer,” says Thuy Ngo, Ph.D., who led the research.

Ngo is an assistant professor of molecular and medical genetics in the OHSU School of Medicine and a member of CEDAR, the OHSU Knight Cancer Institute’s Cancer Early Detection Advanced Research Center.

Many competing groups are developing blood tests for cancer early detection, but most are focused on finding cancers in a general population. Ngo and coauthors say there is an unmet need for a blood test that can identify patients with pre-malignant conditions who require further intervention due to a higher likelihood of cancer incidence. In the case of cirrhosis and MGUS, some will progress to cancer, but many others will not. There currently is no reliable way to predict which cases will progress.

The blood test devised by Ngo and colleagues looks for molecules called messenger RNA, which convey instructions from genes. Each RNA molecule is built of chemical units arranged in a single strand like letters of an alphabet that spell out the message of a gene.

RNA routinely escape from cells and circulate in the blood, but unprotected, the free molecules quickly degrade; this makes it technically challenging to read the sequences of a mass of cell-free RNA collected from blood and make sense of it.

“A few years ago, not many people believed cell-free messenger RNA could be reliably detected in the blood because it is prone to degradation,” Ngo says. “We found a way to handle it, and we are among the first to apply it in cancer and pre-cancer early detection.”

In the new research, the team took blood samples from eight people with liver cancer, 10 with multiple myeloma, four with liver cirrhosis, eight with MGUS, and 20 non-cancer donors. They painstakingly sequenced the RNA from the samples to obtain a view of gene activity represented by the messenger molecules recovered from blood.

From this, they were able to identify patterns of gene activity in the different groups of people and build models to distinguish those with cancer from those with pre-malignant conditions, and from those without cancer.

Experiments showed that the level of the cell-free RNA biomarkers displayed a gradual transition from non-cancerous states through pre-cancerous conditions and cancer. The researchers validated the biomarkers using a set of subjects different from the ones used to develop the models, and they proved highly accurate at distinguishing cancer from non-cancer. 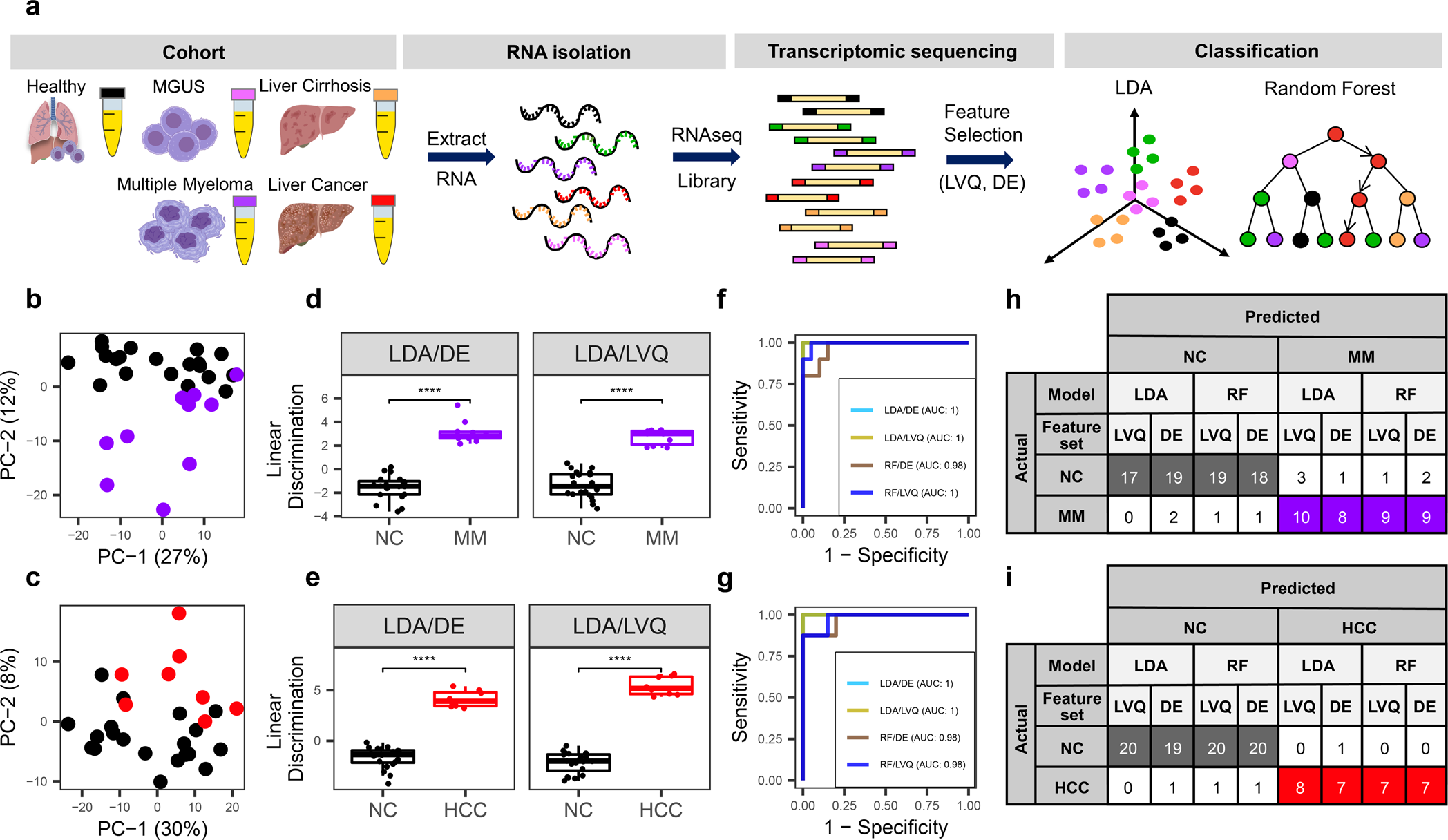 a Schematic overview of the cfRNA profiling workflow starting from plasma collected from the patients and NC donors in EDTA-coated tubes, cfRNA extraction, sequencing, feature selection, and classification. b, c PCA analysis using the top 500 genes with the largest variance across NC and MM (b) or HCC samples (c). d, e Linear discriminant analysis (LDA) using DE genes with padj <0.01 and top ten most important genes identified by LVQ analysis. P value is derived from the Wilcoxon test. Center-line indicates the median value across all patients in that group, and the hinges represent the lower (Q1) and upper (Q3) quartile, with whiskers extending to the minimum and maximum of the resulting distribution. f, g ROC curves of the two classification models LDA and Random Forest (RF) model with two feature sets DE and LVQ. h, i LOOCV with the two models LDA and RF with two feature set DE and LVQ.

“This is promising, but the sample set is small, so we need to be modest here,” Ngo cautions. “It’s still very early stage and further clinical validation will be needed.”

The research lays the foundation for developing inexpensive assays that measure levels of cell-free RNA in blood for a small panel of genes that can differentiate cancer from pre-malignant conditions.

“You don’t need any fancy equipment for doing this,” Ngo says. “Any central lab with standard equipment can do the work.” Sophisticated sequencing was only required for the discovery work of identifying the telltale gene signatures.

Ngo and OHSU have filed a patent on their findings, and Ngo says she is talking with a company about a licensing deal to develop the technology.

“We have several directions to move it forward,” she says.

Ngo’s priority is people at risk for liver cancer. One-quarter to one-third of adults in the U.S. have fatty liver disease, making them vulnerable to cirrhosis and liver cancer. Across the globe, infectious hepatitis puts enormous numbers of people in danger of developing liver cancer. This is why, Ngo says, the world needs a simple, affordable test to identify those at highest risk and monitor their health for the earliest signs of malignant growth.